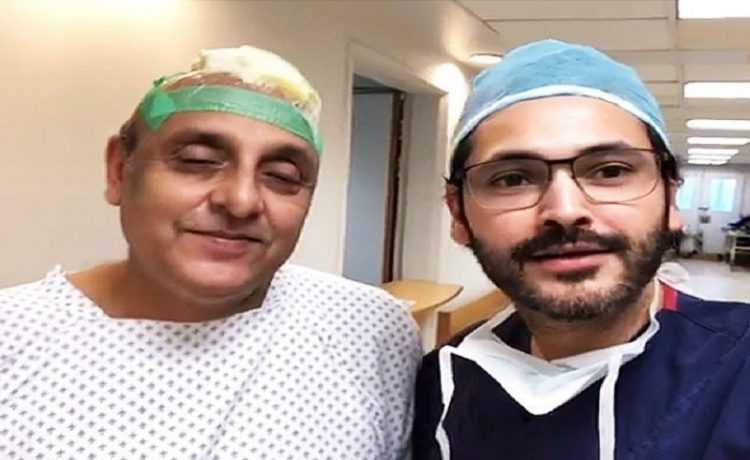 Fahad Mirza posted a video on his Insta saying about the treatment he is going to give to Sajid Hassan “I have Sajid Hasan with me here, we’re taking him for scalp reconstruction, and God willing, we will have Hasan bhai back in no time.”

It’s been few weeks when Sajid Hassan took social media to report about his horrendous hair transplant experience. And this time a renowned plastic surgeon Fahad Mirza broke the news that he is proving Sajid Hassan treatment for his badly effected scalp. Fahad Mirza also happens to be an actor at the same time and married to gorgeous actress Sarwat Gillani.

Dr. Fahad quoted on his post,’ ‘Doing Sajid Hassan’s scalp reconstruction. May Allah give me and my team success and Sajid bhai Shifa!! Ameen”. While Sajid Hassan standing beside him endorsed saying he has promised me to make me well. This time the surgery is provided by also an acquaintance who happens to be a sound professional, plastic surgeon with specialization in Facial contouring, including Cheek, Chin & Jawline sculpting, Surgical & Non Surgical Nose Reshaping And Lip Fillers.

Every one wished him to be recovered fully, since last time he took social media to share is ordeal, people were left in surprise at the damaged scalp wound he showed. Hasan told that day after the transplant process began; he fell sick and suffered an infection on his head as well as a severe fever for 10 days. He remained unconscious for 15 days but even then the doctor did not consider it a big deal and “kept cleaning the wound with saline water”. Not just that he suffered physically, his family was in pain too and he also had to suffer a big loss at work.

Read More : Sajid Hassan opens up about his ordeal after a hair transplant

Sajid Hassan’s video post also acted as a public service message, making people realize how important it is to get full knowledge for any medical procedure before opting for one and conduct a thorough research from where to get it done.

tweet
Share on FacebookShare on TwitterShare on PinterestShare on Reddit
Saman SiddiquiFebruary 19, 2018
the authorSaman Siddiqui
Saman Siddiqui, A freelance journalist with a Master’s Degree in Mass Communication and MS in Peace and Conflict Studies. Associated with the media industry since 2006. Experience in various capacities including Program Host, Researcher, News Producer, Documentary Making, Voice Over, Content Writing Copy Editing, and Blogging, and currently associated with OyeYeah since 2018, working as an Editor.
All posts bySaman Siddiqui