Clashes have taken place for a fourth day in several Swedish cities, sparked by the apparent burning of the Holy Quran by a far-right group 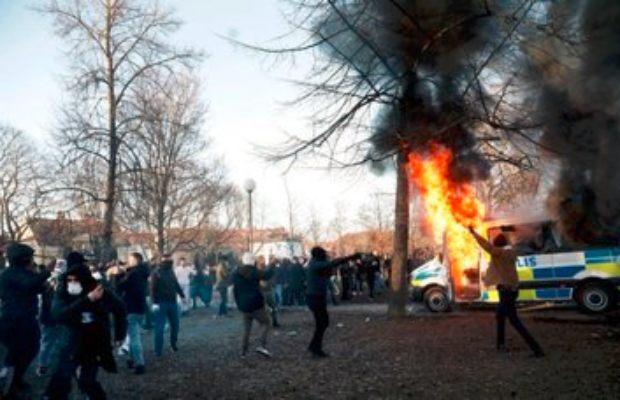 Dozens have been arrested in Sweden after riots were sparked over a planned Holy Quran burning by the far-right group.

As reported, clashes erupted in the cities of Norrkoping and Linkoping for the second time in four days over rallies by anti-immigration and anti-Islam group Hard Line, led by the Danish-Swedish politician Rasmus Paludan.

The images and video clips are emerging on the Twitter timeline showing the protests against plans by Stram Kurs to burn the Quran that turned violent in Sweden.

#Ramadan in #Sweden, this time in #Örebro… The Swedish police have zero chance against the angry Islamists mobs pic.twitter.com/abx8ySs4wg

Even if you are a country which is top in Human development index if you induct this mediaeval cult in your nation, they will, they surely will, pull you back to the mediaeval era.#Sweden #swedenriotspic.twitter.com/TZZqLZXlym

According to the local police, at least 26 people have been arrested in the wake of weekend clashes in the cities of Norrkoping and Linkoping against the planned burning of the Holy Quran by a far-right group.

While at least three people were injured in Norrkoping on Sunday when officers fired warning shots at the rioters.

In a statement issued on Monday, police said that eight people were arrested in Norrkoping and 18 others were held in Linkoping.

The protesters in Norrkoping numbering about 150 threw stones at officers and set cars on fire, it added.

Vehicles, including buses and cars, were set on fire in the southern city of Malmo during the rally on Saturday.

At least 16 police officers were injured during the weekend-long unrest in Linkoping, Norrkoping, and the suburbs of the capital Stockholm.

Sunday saw violence in Norrkoping after Rasmus Paludan said he planned to hold a rally there.

Reportedly, he never showed up in the city.

In a statement posted by his far-right, anti-immigrant Stram Kurs (Hard Line) party, Paludan said he cancelled the rally because Swedish authorities had “shown that they are completely incapable of protecting themselves and me”.

As being reported, he had earlier appeared on Thursday in the central city of Jonkoping, but as he talked into a megaphone while holding a Quran, his words were muffled out by a priest ringing the bells of a local church in protest.

On the other hand, a handful of Muslim countries have condemned the developing situation in Sweden.

Saudi Arabia has condemned the act, calling it the “deliberate abuse of the holy Quran by some extremists in Sweden, and provocation and incitement against Muslims”.

#Statement | The Kingdom of #Saudi Arabia condemns the deliberate abuse of the Holy Quran by some extremists in #Sweden. pic.twitter.com/uefX0xNzfR

On the other hand, Iran and Iraq had earlier summoned the Swedish ambassadors to lodge their protests.