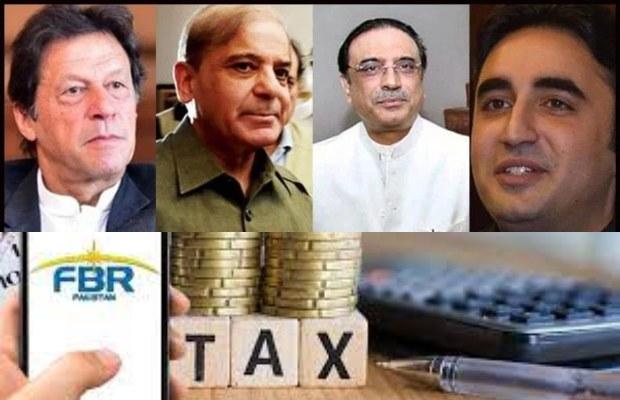 The Federal Board of Revenue (FBR) has released the tax directory of parliamentarians for the year 2019,

As per the details provided by the FBR, only 80 senators and 312 members of the National Assembly have submitted their tax returns.

Prime Minister Imran Khan’s income is Rs44.5 million in 2018 and he has paid an income tax of Rs9.8 million.

The most major taxpayer among the parliamentarians was PTI’s MNA from Karachi Najeeb Haroon, who paid Rs140.7 million in income tax.

As per the FBR, Asif Ali Zardari has an income of more than Rs 280 million. He paid Rs2.2 million and his son Bilawal Bhutto Zardari’s total income is Rs 38 million and he has submitted a tax of Rs0.53 million.

Leader of the opposition in the National Assembly, Shehbaz Sharif paid nearly Rs9.73 million in tax in 2018 but the figure came down to around Rs8.24 million in 2019.

Finance Minister Shaukat Tarin, who was a member of the economic and finance committee in 2019, paid Rs26.6 million as income tax.

Leader of the Opposition in Punjab Assembly Hamza Shehbaz Sharif paid Rs8.7 million in 2018 but the figure slumped to Rs7.1 million in 2019.