Cricketers condemned this horrific attack on two Christchurch mosques in New Zealand which has left at least 49 dead and many injured on Friday morning. 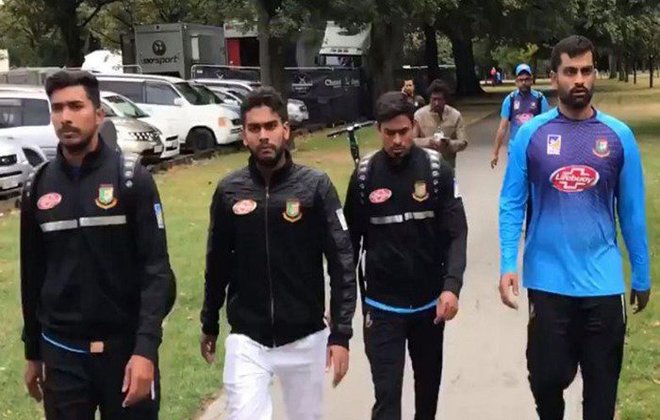 The third test match between New Zealand and Bangladesh on Friday has been canceled after multiple people were killed in gun attacks on mosques in Christchurch.

Bangladesh team had a narrow escape, as were to attend the prayers at one of the attacked mosques.
The Bangladesh Cricket Board confirmed that all members of the team present at the site of the shooting were safely back at the hotel.

“They were on the bus, which was just pulling up to the mosque when the shooting began,” Mario Villavarayen, strength and conditioning coach of the Bangladesh cricket team, told Reuters in a message. “They are shaken but good.”

The news of match cancellation was confirmed by the New Zealand Cricket Board on Twitter, “Our heartfelt condolences go out to the families and friends of those affected by the shocking situation in Christchurch. A joint decision between NZC and the BCB has been made to cancel the Hagley Oval Test. Again both teams and support staff groups are safe.”

The Bangladesh cricket team is in Christchurch to play New Zealand in a third cricket Test which was scheduled to start on Saturday.

Bangladeshi cricketer Tamim Iqbal Khan shared about the incident on Twitter; he wrote: Entire team got saved from active shooters!!! Frightening experience and please keep us in your prayers.

Mushfiqar Rahim also shared about it on Twitter, ” Alhamdulillah Allah save us today while shooting in Christchurch in the mosque…we r extremely lucky…never want to see this thing happen again….pray for us.”

International cricketers condemned this horrific attack on two Christchurch mosques in New Zealand which has left at least 49 dead and many injured on Friday morning.

tweet
Share on FacebookShare on TwitterShare on PinterestShare on Reddit
Saman SiddiquiMarch 15, 2019
the authorSaman Siddiqui
Saman Siddiqui, A freelance journalist with a Master’s Degree in Mass Communication and MS in Peace and Conflict Studies. Associated with the media industry since 2006. Experience in various capacities including Program Host, Researcher, News Producer, Documentary Making, Voice Over, Content Writing Copy Editing, and Blogging, and currently associated with OyeYeah since 2018, working as an Editor.
All posts bySaman Siddiqui