Three killed after getting struck by lightning in Karachi, Thatta

Karachi, Hyderabad, and Thatta have received heavy rainfall on Friday 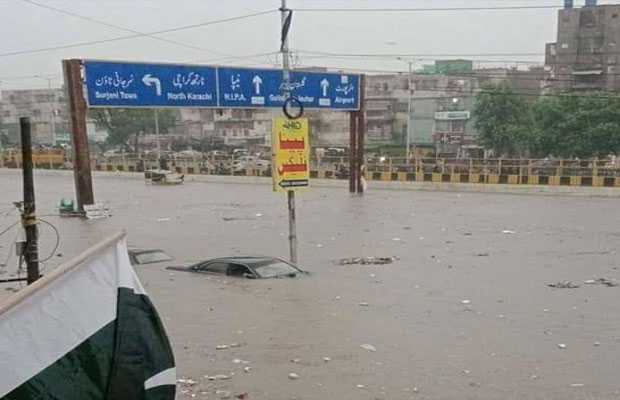 At least three people have died after getting struck by lightning as various parts of Sindh — including Karachi, Hyderabad, and Thatta — received heavy rainfall on Friday.

According to details, a woman Idrees Ghubwani village in Thatta has died after being struck by lightning, police said.

In Karachi, two people died in Memon Goth after getting struck by lightning, authorities confirmed.

On the other hand, Hyderabad has received heavy rainfall that disrupts the power system. The Hyderabad Electric Supply Company (HESCO) spokesperson saying at least 60 feeders had tripped in the city’s Lateefabad and Qasimabad neighbourhoods.

In Karachi, rainwater entered the residential areas after  a nullah in Baldia Town overflowed; the same happened in Buffer Zone Sector 15A-4.

In North Karachi, numerous cars sank in rainwater near the Powerhouse Chowrangi, while water started stagnating in North Nazimabad’s Block F and B.

The Surjani Town area of Karachi has received the highest rainfall at 170 millimetres (mm), according to the Pakistan Meteorological Department (PMD).