Alarming situation at the Western border! 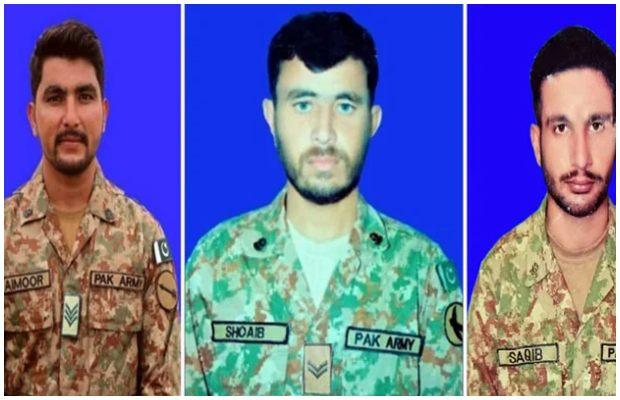 Three Pak Army soldiers were martyred in another cross-border attack from Afghanistan.

According to the statement issued by the Inter-Services Public Relations (ISPR) on Saturday, the terrorists from inside Afghanistan across the international border opened fire on Pakistani troops in the area of Dewagar in North Waziristan District.

Pakistani troops responded in a befitting manner and as per credible intelligence reports, terrorists suffered heavy casualties, the ISPR said.

However, during the exchange of fire, three Pakistan Army soldiers also embraced martyrdom, the ISPR added.

“Pakistan strongly condemns the use of Afghan soil by terrorists for activities against Pakistan and expects that Afghan government will not allow such activities, in future,” the military’s media wing added.

“Pakistan Army is determined to defend Pakistan’s borders against the menace of terrorism and “such sacrifices of our brave men further strengthen our resolve,” ISP said.

The alarming situation at the Western border!

Pakistan Foreign Office had called on the Taliban government in Kabul last Sunday demanding to take stern actions against militants launching attacks against the country from inside Afghanistan.

“Pakistan, once again, strongly condemns terrorists operating with impunity from Afghan soil to carry out activities in Pakistan,” the foreign ministry said in the statement.

“Pakistan requests the sovereign Government of Afghanistan to secure Pak-Afghan Border region and take stern actions against the individuals involved in terrorist activities in Pakistan.”

Seven Pakistani soldiers were killed in the North Waziristan district over a week ago by terrorists operating from Afghanistan, the ministry added.

“Unfortunately, elements of banned terrorist groups in the border region, including TTP, have continued to attack Pakistan’s border security posts, resulting in the martyrdom of several Pakistani troops,” the statement added.

tweet
Share on FacebookShare on TwitterShare on PinterestShare on Reddit
Saman SiddiquiApril 23, 2022
the authorSaman Siddiqui
Saman Siddiqui, A freelance journalist with a Master’s Degree in Mass Communication and MS in Peace and Conflict Studies. Associated with the media industry since 2006. Experience in various capacities including Program Host, Researcher, News Producer, Documentary Making, Voice Over, Content Writing Copy Editing, and Blogging, and currently associated with OyeYeah since 2018, working as an Editor.
All posts bySaman Siddiqui