The authorities have suspended the Metro Bus service and blocked its surrounding roads. 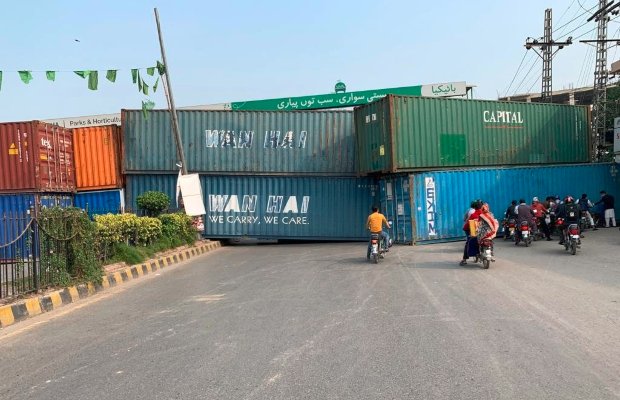 Islamabad and Rawalpindi have been partially shut down as the government braces for protests held by banned Tehreek-i-Labbaik Pakistan (TLP).

Strict security measures have been taken in Rawalpindi, where authorities have suspended the Metro Bus service and blocked its surrounding roads.

Containers have been placed on the Sixth Road leading to the Faizabad area. While the Faizabad Ojri Camp road has also been sealed off.

In a statement, Rawalpindi Traffic Police said Murree Road and Rawal Road have been closed for commuters while Old Airport Road and Mall Road are open.

“Additional policemen have been posted at the High Court Chowk and Mall Road to ensure the smooth flow of traffic,” it added.

The banned outfit had announced a long march towards Islamabad after Friday prayers on Thursday.

“If any hurdles are created, the party also has a Plan B to thwart any official attempts,” he said speaking at a protest site in Lahore.

Containers have also been placed at various points in Lahore, such as the Samanabad turn at Multan Road and at the Grid Station Stop.

Road blocked from Samanabad to Allama Iqbal Town due to TLP dharna in Lahore. #TLPDharna pic.twitter.com/8rsRzbDB8B

The TLP had resumed protests in Lahore earlier this week by staging a massive sit-in on Multan Road near its headquarters at Masjid Rehmatul-lil-Aalemeen.

While the internet services remain suspended in the provincial capital for the second consecutive day.

The Ministry of Interior had written to the Pakistan Telecommunication Authority (PTA) to suspend internet services in various areas of Lahore due to a banned outfit TLP’s protest.