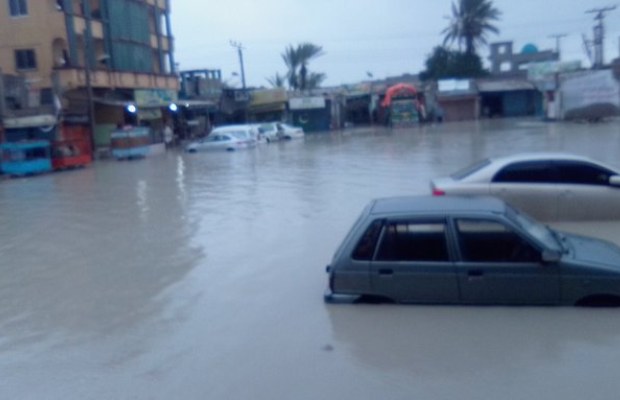 Heavy rains have been continuing in various cities of Balochistan including Gwadar since last night which has inundated the low-lying areas.

As being reported, rainwater entered houses in the southern part of the port city of Gwadar, while in shops at Airport Road and Ladies Market.

The authorities have sent emergency teams for relief operations in Bilingor.

According to the Meteorological Department, 57.2 mm of rain has been recorded in Gwadar so far while the communication system has been severely affected by the torrential rains.

Many people from the affected areas took to Twitter to share the situation in the rain-affected areas of Baluchistan, including Gawadar.

According to the meteorological department, a rain system is still in place in different areas including Gwadar district due to which more rains are also expected.

According to the meteorological department, the highest rainfall of 70 mm was recorded in Pasni, 57 mm in Gwadar, 27 mm in Ormara, 24 mm in Ketch and Giwani, and 8 mm in Quetta, and 4 mm in Kalat. Khuzdar, Dalbandin, and Panjgur received 3 mm of rainfall.

Pakistan Meteorological Department (PMD) predicted a wet spell in the coastal belt of Balochistan that will last till January 06.