In the latest the Dubai watch dealer has confirmed that he made a parody video, and did not buy Graff watch.

The statement by the company, Styleoutwatches and the dealer came after rumours were circulating on social media that it had sold the watch for 250k USD in 2019.

Dubai dealer says he only made a fun video which was used by PTI leader Fawad Chaudhary as evidence to claim the watch was sold 3 years ago (in 2019) for 250k USD.

“We have to clarify something because there is a lot of media hype and political problems going on about a particular watch,” he said.

He maintained that they did not sell MasterGraff Tourbillon minute repeater watch that Imran Khan had taken from the Toshakhana.

“What we did do is we got it for promotion and marketing reasons,” he said, adding that they took the watch from an undisclosed person, made the pictures and posted it on social media to create attention and hype in 2019.

“Then, we returned the watch to the person and whatever happened before or after, we don’t know,” he clarified. He requested the people to keep them out of the matter.

Dubai dealer says he only made a fun video which was used by Fawad Chaudhary as evidence to claim the watch was sold 3 years ago (in 2019) for 250k USD. Dubai dealer rejects the claim saying he didn’t buy the watch Saudi crown prince gave to Imran Khan 4/4 pic.twitter.com/lGgbNgbNmR

Styleoutwatches in a statement said: “We certify that we never bought or sold the Graff Mecca Map diamond MasterGraff Tourbillon minute repeater watch along with diamond cufflinks and round diamonds gent’s ring, as well as rose gold pen set with diamonds to any person.”

The company added that it has come to our attention through various public and media sources that their verified lnstagram page (styleoutwatches) is being used politically on various social media and public posts.

“We were approached by undisclosed person, to market this watch using our Instagram page,” Styleoutwatches said in a statement.

It added that later, however, they were told that this watch has already been sold by a third party.

“Any information about the watch being sold for USD250,000 are incorrect and baseless,” clarified the company. 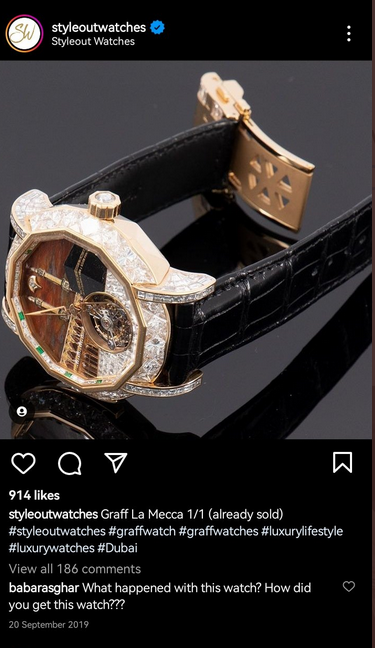