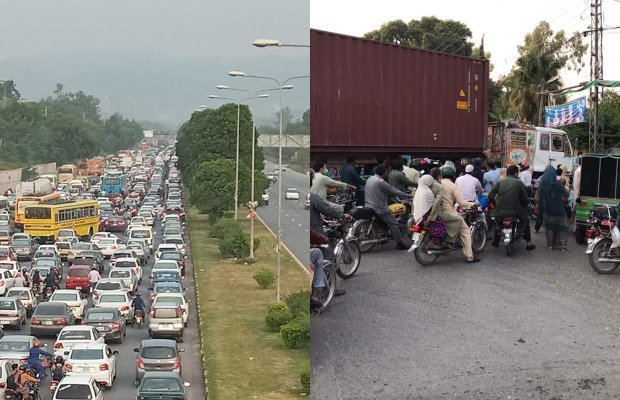 Security has been beefed up in Islamabad and Lahore amid an ongoing wave of protests and sit-ins by the banned Tehreek-e-Labbaik Pakistan (TLP) for the third consecutive day.

The traffic system in Islamabad and Rawalpindi is badly hit by the ongoing protests as main thoroughfares connecting to Faizabad Interchange and other adjoining roads have been blocked by the authorities.

Several roads remained blocked in Lahore as well on Saturday.

According to a spokesperson for the Lahore police, Rana Arif, the protesters have reached the Kala Shah Kaku Interchange and are planning to use the Grand Trunk Road to reach Islamabad.

Meanwhile, Interior Minister Sheikh Rashid Ahmed, who went to Dubai to watch Pakistan vs India T20WC match, has returned back on Saturday on the directives of Prime Minister Imran Khan to monitor the situation.

The Punjab Safe Cities Authority (PSCA) issued a list of roads that were closed for traffic amid the tense situation.

According to the PSCA, the closed routes in Lahore include:

Alternatively, 9th Av can be used to enter Islamabad and Peshawar Rd can be used to for Rawalpindi.@ICT_Police @dcislamabad pic.twitter.com/55NFl1amon

Diversion Placed at Murree Rd. before Faizabad for traffic from Rawal Dam Chowk to Faizabad.

A day earlier, three policemen were martyred and several others injured in clashes with TLP workers.