The driver, an assistant driver, and a guard lost their lives in the incident. 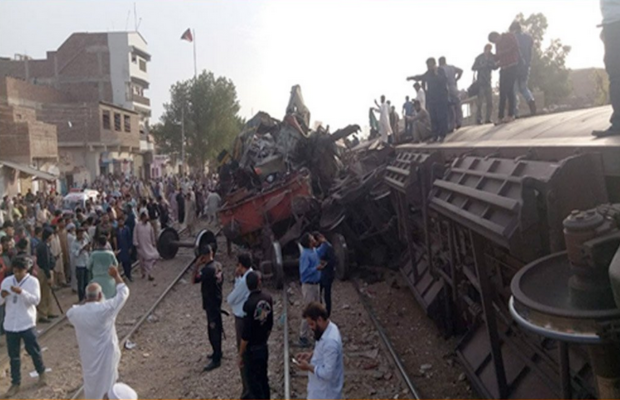 Three people were killed and a few injured when a passenger train has collided with a freight train at Makli Shah, near Hyderabad on Thursday.

The Lahore-bound Jinnah Express, which had departed from Karachi, rammed into a stationary goods train that was carrying coal and was bound for Yusufwala.

As the result of collision, three bogies of the goods train capsized. Reportedly, no bogie of the Jinnah Express was derailed but it was left standing on a section of the tracks which suffered damage.

According to the Station Superintendent Muhammad Rizwan, Jinnah Express passenger train going from Karachi to Lahore collided with the stationary freight train near Latifabad area of Hyderabad.

He said that the Jinnah Express crashed into the freight train possibly because the train driver wasn’t able to get the signal.

“A driver, an assistant driver, and a guard lost their lives in the incident outside Hyderabad at a signal crossing,” said Federal Railways Minister Shiekh Rashid Ahmed.

“All passengers are safe”. He also stated that the matter was being investigated and a brief report on it would be released within an hour.

Sindh Chief Minister Syed Murad Ali Shah expressed his grief over the train accident, a statement by his spokesperson said.

The chief minister has directed the Hyderabad commissioner to provide the injured with all possible assistance and instructed the hospital to make the necessary arrangements in this regard.

A team of Sindh Rangers reached at the site of the incident to assist the rescue operations.