Trump fled to bunker as protests raged outside White House

The protests were initiated by the death of George Floyd— a black man who died after being handcuffed and pinned to the ground by a white Minneapolis police officer. 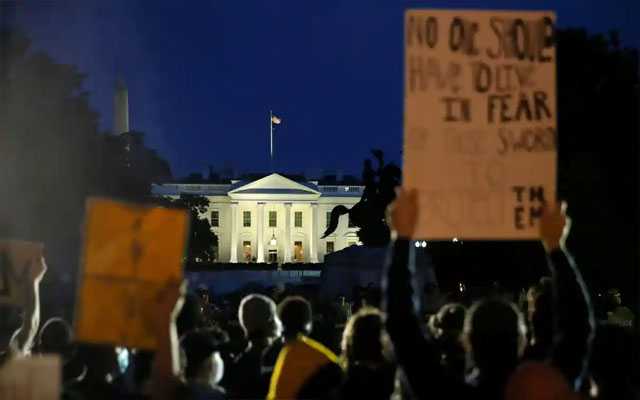 US President Donald Trump was taken to a White House bunker by secret service agents, a hideout usually reserved for times of war or terrorist attacks, in the midst of noisy protests on Friday night as hundreds of demonstrators gathered outside the executive mansion, throwing rocks and tugging at police barricades.

According to several accounts by unnamed officials, Trump spent nearly an hour confiscated in the rigid walls of hardened underground rooms designed for use in grave emergencies, and in which the then vice-president, Dick Cheney, took shelter during the 9/11 attacks.

The protests were initiated by the death of George Floyd— a black man who died after being handcuffed and pinned to the ground by a white Minneapolis police officer.

The president’s move to the bunker was first reported by the New York Times.

Trump and his family have been shaken as the crowds turned violent, according to the Republican. It was not immediately clear if first lady Melania Trump and the couple’s 14-year-old son, Barron, were at the White House or joined the president in the bunker.

It is assumed that the Secret Service protocol would have called for all those under the agency’s protection to be in the bunker.