The protests across the US began after a video showed a black American named Floyd, 46, being arrested in Minneapolis on 25 May 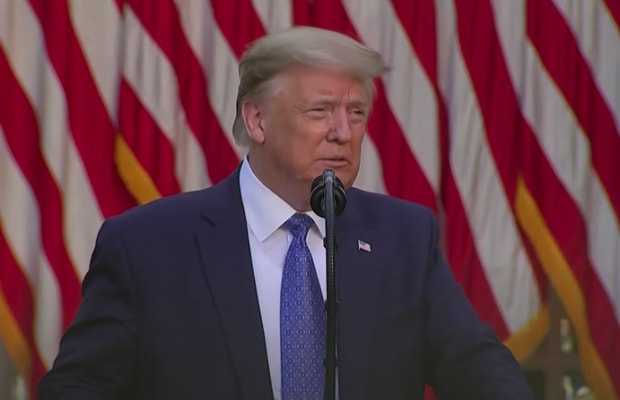 US President Donald Trump has threatened to send in the military to stop growing civil unrest in the US over the death of a black man in police custody.

POTUS said if cities and states failed to control the protests and “defend their residents” he would deploy the army and “quickly solve the problem for them”.

The protests across the US began after a video clip went viral, showing a black American named Floyd, 46, being arrested in Minneapolis on 25 May and a white police officer continuing to kneel on his neck even after he pleaded that he could not breathe.

His statement of deploying the army for Americans has left many furious and the reactions are pouring in on social  media:

Trump is “planting the seeds” for Martial Law.

Finally declaring War on our own citizens.

Make no mistake, Trump would not initiate Martial Law to protect American citizens from dying from COVID-19, but he will do it now to stop people from exercising their First Amendment Rights. pic.twitter.com/OrnB377tUu

Look, I know @realDonaldTrump has never, or will ever, read the Constitution. But come on, people. It’s right fucking there. Can’t one of his dumbass cronies make a pop-up picture book for him?#AmericaOrTrump #MartialLaw2020 #25thAmendmentNow pic.twitter.com/oXChqdzF9O

Fuck the "Laws of your nation"

rich white son of an racist oligarch raping and stealing and invading other nations: becomes president

poor black guy who allegedly (!) paid with a fake 20 dollar bill: gets tortured and killed by police #Trump pic.twitter.com/yi8xl2Qpto

President Donald Trump is also being slammed by church leaders and politicians for using tear gas and pepper spray to clear out protesters near St. John’s Church in order to visit the chapel, accusing him using his visit for a photo opportunity on Monday evening, carrying a Bible in his hand.

Trump was allegedly angry about news coverage that he fled into a White House bunker on Friday during George Floyd protests, and told his aides he wanted to be seen outside the White House gates, prompting his walk to St. Johns, according to CNN White House Correspondent Kaitlin Collins.

This is the president we have. They’re all for peaceful protests until they breakout the tear gas and start shooting rubber bullets so our #DictatorTrump Can Speak. #MartialLaw2020 Fuck this asshole and his armed forces if they attack Americans. pic.twitter.com/F98xdJHFNI

tweet
Share on FacebookShare on TwitterShare on PinterestShare on Reddit
Saman SiddiquiJune 2, 2020
the authorSaman Siddiqui
Saman Siddiqui, A freelance journalist with a Master’s Degree in Mass Communication and MS in Peace and Conflict Studies. Associated with the media industry since 2006. Experience in various capacities including Program Host, Researcher, News Producer, Documentary Making, Voice Over, Content Writing Copy Editing, and Blogging, and currently associated with OyeYeah since 2018, working as an Editor.
All posts bySaman Siddiqui