Erdogan, on a two-day official vist to Pakistan, also addressed a joint session of Pakistani Parliament for a record fourth time 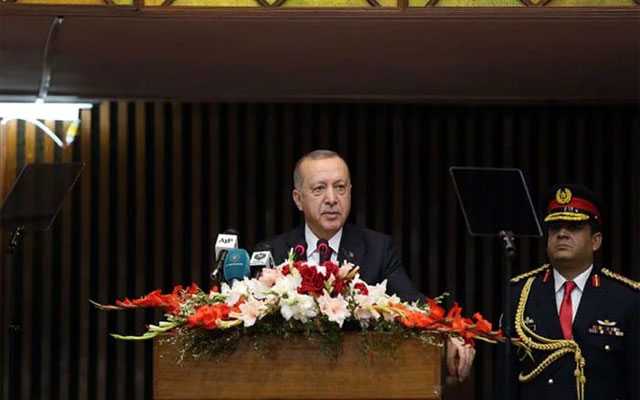 Turkish President Recep Tayyip Erdogan on Friday compared Pakistan to his “second home” and pledged his continued support for Islamabad and its stance on Kashmir and other core issues.

Erdogan, who  is on a two-day official trip to Pakistan, also addressed a joint session of Pakistani Parliament for a record fourth time, stating that Ankara will back Islamabad at Financial Action Task Force (FATF) conferences despite any pressure.

“I thank God for giving me this chance and I am thankful to each of you for allowing to address this meeting,” said Erdogan.

Expressing gratitude towards the people of Pakistan for the warm welcome, he said: “Here, in Pakistan, we never consider ourselves as strangers. We feel ourselves at home, in one of the most important meeting points in Asia, in the fertile geography of the Islamic world.”

“Fraternal ties between Turkey and Pakistan have been granted to very few countries and nations of the world.”

“Relations between Pakistan and Turkey are admirable. Pakistan has always backed Turkey during crucial times.”

Turkey will support “Kashmir Cause”

Erdogan, while reiterating his support for the Kashmir cause, said:

“Today, Kashmir for us is what it is for you,” adding that “our Kashmiri brethren have suffered a lot and the situation has now become worse.”

“The concern can only be resolved through justice and fairness. Kashmir resolution will be in the interest of all the stakeholders and Turkey will continue to support peace and dialogue in this matter.”

“How can we forget the people of this nation who prayed for Turkey? Our friendship is established on love and not vested interests.”

Turkey will back Pakistan at (FATF)

The Turkish president also appreciated Pakistan’s struggles in the war against terrorism and said the country was the most affected by the terrorism.

“Like in the past, we will continue to support Pakistan in the future,” he asserted.

“Despite all the pressure, I guarantee you Turkey’s constant support at the FATF.”

“Our friendship is based on love and respect. Pakistan’s pain is our pain,” the Turkish president said.

“Pakistan is heading towards development and it cannot be achieved in days, it requires hard work.”

‘Jerusalem is our red line’

Erdogan, during his address, also mentioned to the ‘deal of the century’ by US President Donald Trump.

“This is not a peace plan, it’s a plan of occupation,” he said.

“We have been keenly involved in all matters concerning the Muslim Ummah especially during our presidency of the Organization of Islamic Cooperation (OIC).”

“We took an honourable and firm stance against the  Israel’s attack on our first Qibla, Al-Quds Al-Sharif. We declared to the whole world that we would not leave Haram Al-Sharif at the mercy of the occupying Israeli administration by saying,” elaborated the President Erdogan.

“Jerusalem is our red line.”

Speaker Asad Qaiser greeted the Erdogan and said that “he is a true friend of Pakistan and an important leader of the Islamic world.”

Earlier on Thursday, the Turkish dignitary was given a warm red-carpet welcome as he arrived on a two-day official visit to Pakistan. He was received by Prime Minister Imran Khan at the Nur Khan Airbase.

In late 2016, Erdogan last addressed a joint session when he visited the country.