The adult film star Mia Khalifa voiced her concerns and tweeted in support of Indian farmers. 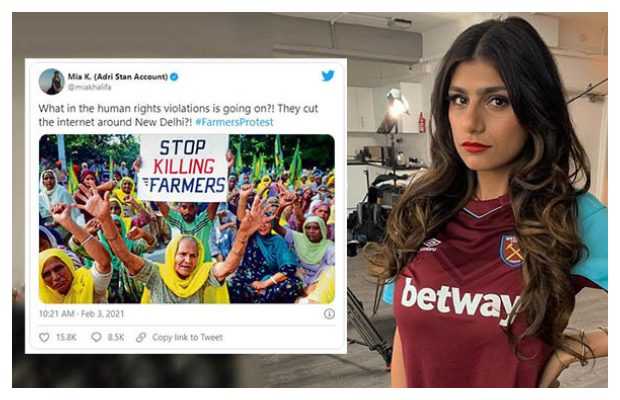 Twitter is having a meltdown ever since Mia Khalifa tweeted in support of #FarmersProtest.

Though the ongoing farmers protest in India made headlines in international media, but a tweet from adult film star Mia Khalifa has left the social media especially the Indians having a meltdown.

Mia Khalifa voiced her concerns over the Indian government’s decision to block internet services at the protest sites near Delhi borders.

In a tweet, she said:  “What in the human rights violations is going on?! They cut the internet around New Delhi?!.”

What in the human rights violations is going on?! They cut the internet around New Delhi?! #FarmersProtest pic.twitter.com/a5ml1P2ikU

And in a later tweet, she said,” Paid actors,” huh? Quite the casting director, I hope they’re not overlooked during awards season. I stand with the farmers.”

“Paid actors,” huh? Quite the casting director, I hope they’re not overlooked during awards season. I stand with the farmers. #FarmersProtest pic.twitter.com/moONj03tN0

But Twitter couldn’t handle Mia Khalifa’s support for the farmers’ cause and all sorts of reactions are trending on the microblogging site.

Mia Khalifa just tweeted about the farmers. Hey Bhakts, this is a test of your boycott game.

Greta I knew, but I had to google to find out who this Mia Khalifa is. Now I am worried Google is going to bombard me with targeted ads of her.

The Indian left is dumber than I thought.

To them, Rihanna and Mia Khalifa are bigger authorities on agricultural reforms than Gita Gopinath, chief economist of the IMF.

When Mia Khalifa is backing the farmers, then so am I pic.twitter.com/3mFLtsG9nF

Sanghis accusing Rihanna, Mia Khalifa and Greta Thunberg of being "ISI agents" is the best thing on twitter today. #Number1

Not just comments, the Lebanese-American adult star has ignited a flood of memes as well:

After Mia Khalifa tweeted in favour of "farmers protest"

Is trending in India. pic.twitter.com/AShQfBlbDA

Before Khalifa, a number of international celebrities including pop singer Rihanna and Swedish environmental activist Greta Thunberg also tweeted about the Indian farmers’ protest and extended their support to the ongoing agitations.