While no other loss of life or property was reported on the ground. 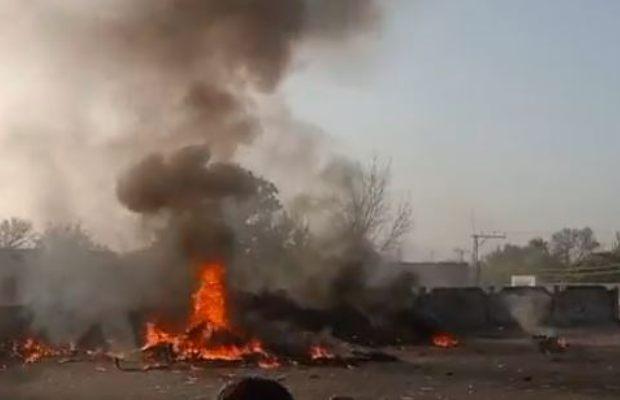 Two pilots have been martyred as a PAF trainee aircraft crashed in Peshawar on Tuesday.

Both the pilots of the aircraft sustained fatal injuries.

While no other loss of life or property was reported on the ground.

As being reported, a board of Inquiry has been ordered by Air Headquarters to determine the cause of the incident.

PAF spokesperson has confirmed that the two pilots present in the plane could not survive and embraced martyrdom in the incident.

Following the plane crash news, ambulances of Rescue 1122 and fire brigade vehicles rushed to the site of the crash.

A number of social media users have shared the video from the spot of the incident:

#PAF trainer aircraft has crashed near #Peshawar during a routine training mission. Both pilots sustained fatal injuries. No other loss of life or property was reported on the ground. A Board of Inquiry has been ordered by Air Headquarters to determine the cause of the incident. pic.twitter.com/OnKIyRtUUU

tweet
Share on FacebookShare on TwitterShare on PinterestShare on Reddit
Saman SiddiquiMarch 22, 2022
the authorSaman Siddiqui
Saman Siddiqui, A freelance journalist with a Master’s Degree in Mass Communication and MS in Peace and Conflict Studies. Associated with the media industry since 2006. Experience in various capacities including Program Host, Researcher, News Producer, Documentary Making, Voice Over, Content Writing Copy Editing, and Blogging, and currently associated with OyeYeah since 2018, working as an Editor.
All posts bySaman Siddiqui