Sharjah Police slaped a fine of AED3,000 (approx Rs190,000) on on the spectators involved in hooliganism 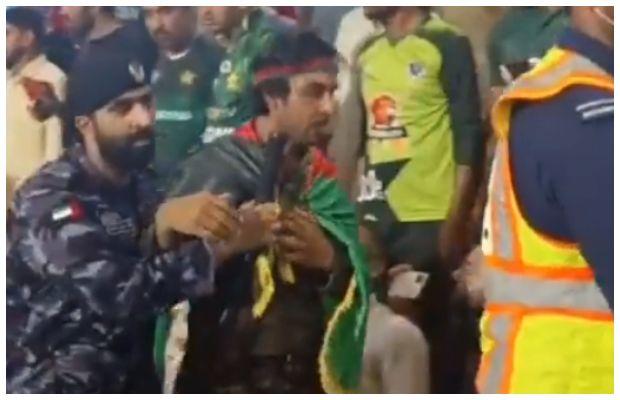 The UAE authorities have arrested a total of 391 Afghan nationals for damaging the Sharjah cricket stadium and attacking Pakistani fans.

They will face heavy fines and like to be deported from UAE along with a lifetime ban on UAE visas.

According to the details, Sharjah police have imposed a fine of AED3,000 (approximately Rs190,000) on the spectators involved in the unfortunate incident.

The police have also warned that those involved in a  case in the future, will be deported.

As reported, 97 Afghan nationals were detained by the United Arab Emirates (UAE) Police authorities for damaging stadium infrastructure and fighting around the stadium.

While 117 people were arrested from other parts of UAE who were involved in the violence against Pakistani cricket fans.

#PAKvAFG Sharjah police hunting down the trouble making afghans and arresting them. These dumb heads will now get deported for cricket 🤦‍♂️ pic.twitter.com/sBnHdYgOUm

Ugly scenes were witnessed at the Sharjah Cricket Stadium after angry and disappointed Afghan cricket fans vandalized the objects following their team’s defeat against Pakistan on Sep 7.

Emotional Afghanistan cricket fans hurled chairs at the Pakistan fans and were involved in scattered fist-fights outside the stadium premises as well.

“You don’t identify hooliganism with cricket and this is unacceptable,” he said.

“This game doesn’t want such an environment. The visuals were really bad. This wasn’t the first time such a thing happened. Emotions should be kept in check, we own our fans and we lodge a protest with the ICC (International Cricket Council),” he added.