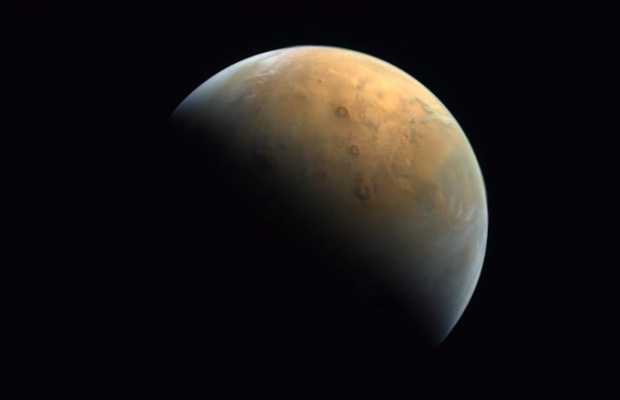 The UAE’s Hope Probe has sent back its first image of Mars, the national space agency announced, days after the spacecraft successfully entered the Red Planet’s orbit.

As being reported the picture that was taken on Wednesday, shows sunlight just coming across the surface of Mars.

“The first picture of Mars captured by the first-ever Arab probe in history,” he captioned the post.

The first picture of Mars captured by the first-ever Arab probe in history, 25,000 km above the Red Planet's surface pic.twitter.com/Qgh2Cn3JPF

According to the official statement, The picture “captured the largest volcano in the solar system, Olympus Mons, emerging into the early morning sunlight.”

The image was taken from an altitude of 24,700km above the Martian surface on Wednesday, a day after the probe entered Mars’ orbit, the statement added.

As per the details the “Hope” will orbit the Red Planet for at least one Martian year, or 687 days, using three scientific instruments to monitor the Martian atmosphere.

Hope Probe is expected to start transmitting more information back to Earth in September 2021, with the data available for scientists around the world to study.

Hope became the first of three spacecraft to arrive at the Red Planet this month after China and the US, which were also launched missions in July, taking advantage of a period when the Earth and Mars are nearest.

tweet
Share on FacebookShare on TwitterShare on PinterestShare on Reddit
Saman SiddiquiFebruary 14, 2021
the authorSaman Siddiqui
Saman Siddiqui, A freelance journalist with a Master’s Degree in Mass Communication and MS in Peace and Conflict Studies. Associated with the media industry since 2006. Experience in various capacities including Program Host, Researcher, News Producer, Documentary Making, Voice Over, Content Writing Copy Editing, and Blogging, and currently associated with OyeYeah since 2018, working as an Editor.
All posts bySaman Siddiqui