U.S. promises to withdraw all of its military forces and supporting civilian staffs, as well as those of its allies, within 14 months if Taliban upholds the deal. 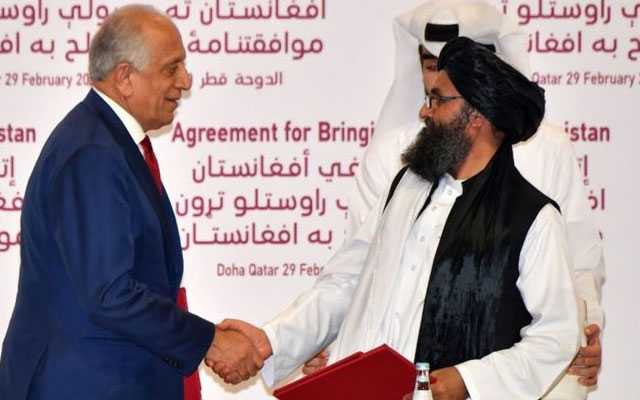 The U.S. and the Taliban have signed a deal paving the way for eventual peace in Afghanistan after nearly 2 decades of conflict.

On Saturday, U.S. Special Representative Zalmay Khalilzad and the head of the militant Islamist group, Mullah Abdul Ghani Baradar have signed the potentially historic agreement in Doha, Qatar, where the two sides spent months hashing out the agreement.

US Secretary of State Mike Pompeo and Taliban leaders also attended the signing ceremony in Doha.

As per the terms of deal, the U.S. promises to withdraw all of its military forces and supporting civilian staffs, as well as those of its allies, within 14 months if Taliban upholds the deal. The drawdown process will begin with the U.S. reducing its troop levels to 8,600 in the first 135 days and pulling its forces from five bases.

The rest of its forces will leave “within the remaining nine and a half months.”

The Afghan government, as a gesture of goodwill, will release up to 5,000 Taliban prisoners in exchange for 1,000 Afghan security forces held captives by the Taliban.

“We owe a debt of gratitude to America’s sons and daughters who paid the ultimate sacrifice in Afghanistan, and to the many thousands who served over the past nearly 19 years,” Gen. Mark A. Milley, chairman of the Joint Chiefs of Staff, said in a statement celebrating the deal.

Under the contract signed in Doha, Taliban also agreed not to allow al-Qaeda or any other extremist group to operate in the zones they control.

The talks between the Afghan government and the Taliban, however, are due to follow.

Afghanistan was invaded by US weeks after the 9/11 attacks by the al-Qaeda group.

During the conflict, more than 2,400 US troops have been killed and about 12,000 are still based in the country. President Trump has promised to put an end to the conflict.

Share on FacebookShare on TwitterShare on PinterestShare on Reddit
Samra MazharFebruary 29, 2020
the authorSamra Mazhar
All posts bySamra Mazhar