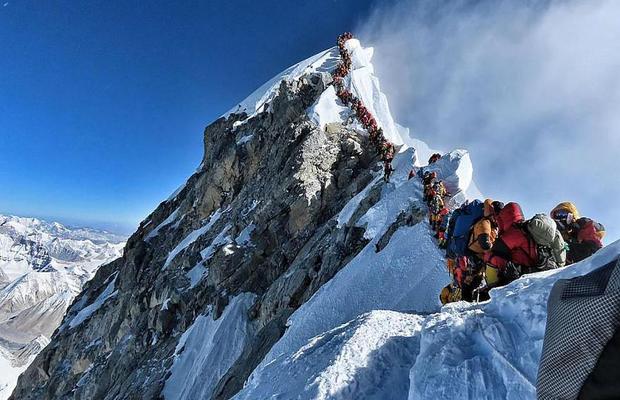 According to the officials, a US climber has died after descending from Everest, on Tuesday, taking this season´s toll to 11. The several deaths are being blamed on overcrowding on the world´s highest mountain.

Reportedly, Christopher John Kulish, 61, had already climbed the 8,848-metre (29,029-feet) peak and was safely back at a camp below the summit on Monday evening.

Mira Acharya from Nepal´s tourism department, told, “All of a sudden he had a heart problem and passed away at South Col, according to his expedition organizers”.

Nepali officials on Friday said that some climbers were getting caught in the crowds on the mountain and this was leading to exhaustion, dehydration and in the worst cases death.

A short weather window has resulted in some teams waiting several hours in the dangerous “dead zone”, running out of oxygen supplies and risking exhaustion.

Today’s reported fatality rises the number of deaths at Everest this season to 11. Among the other deaths reported in this week were of 4 Indian nationals, 1 from Nepal, an Austrian, an American, an Irish and a British climber.

tweet
Share on FacebookShare on TwitterShare on PinterestShare on Reddit
Saman SiddiquiMay 28, 2019
the authorSaman Siddiqui
Saman Siddiqui, A freelance journalist with a Master’s Degree in Mass Communication and MS in Peace and Conflict Studies. Associated with the media industry since 2006. Experience in various capacities including Program Host, Researcher, News Producer, Documentary Making, Voice Over, Content Writing Copy Editing, and Blogging, and currently associated with OyeYeah since 2018, working as an Editor.
All posts bySaman Siddiqui