The apology statement comes after social media users demanded explanation from the US Embassy over its action. 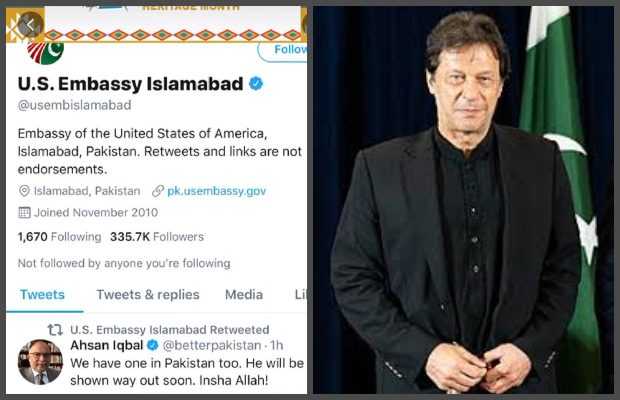 The United States embassy in Islamabad on Wednesday has issued an apology over an ‘unauthorised’ tweet that supporting a controversial statement against PM Imran.

The embassy’s official account on Tuesday had retweeted a post about the premier by PML-N leader Ahsan Iqbal that sparked outrage on social media.

“The US embassy Islamabad Twitter account was accessed last night without authorisation. The US embassy does not endorse the posting or retweeting of political messages. We apologise for any confusion that may have resulted from the unauthorised post,” the embassy said in its tweet.

Dear Followers: The U.S. Embassy Islamabad Twitter account was accessed last night without authorization. The U.S. Embassy does not endorse the posting or retweeting of political messages. We apologize for any confusion that may have resulted from the unauthorized post.

The retweet from the US embassy’s official account attracted a lot of  flak by social media users including PTI leaders who asked the embassy to issue an apology for endorsing Ahsan Iqbal’s opinion.

This is utterly absurd, how can u @usembislamabad retweet against our PM @ImranKhanPTI containing derogatory remarks?This is against diplomatic protocols. An apology is needed with immediate clarification if fake or hacked. @ForeignOfficePk must take required action. pic.twitter.com/2BoVmrdVp8

US Embassy still working in Trumpian mode in support of convicted absconder & intervening brazenly in our internal politics! Monroe Doctrine also died centuries ago! US Embassy must observe norms of diplomacy – so if fake then clarify thru tweet; if not then apology tweet needed pic.twitter.com/YI66Ykqqli

As a Pakistani citizen I demand that the @usembislamabad must apologize for the embarrassing and disrespectful retweet from their account. #ApologiseUSembassy

Pakistan is a sovereign country not an American colony! No one is allowed to interfare in our internal matters. How can @usembislamabad promote the corrupt looters of PDM? We demand a formal apology from US Embassy in Islamabad. #ApologiseUSembassy pic.twitter.com/4Fu4yM6YYx

tweet
Share on FacebookShare on TwitterShare on PinterestShare on Reddit
Saman SiddiquiNovember 11, 2020
the authorSaman Siddiqui
Saman Siddiqui, A freelance journalist with a Master’s Degree in Mass Communication and MS in Peace and Conflict Studies. Associated with the media industry since 2006. Experience in various capacities including Program Host, Researcher, News Producer, Documentary Making, Voice Over, Content Writing Copy Editing, and Blogging, and currently associated with OyeYeah since 2018, working as an Editor.
All posts bySaman Siddiqui