The embassy vehicle, which was driven by a Pakistani driver hit a Suzuki Khyber car in Islamabad. 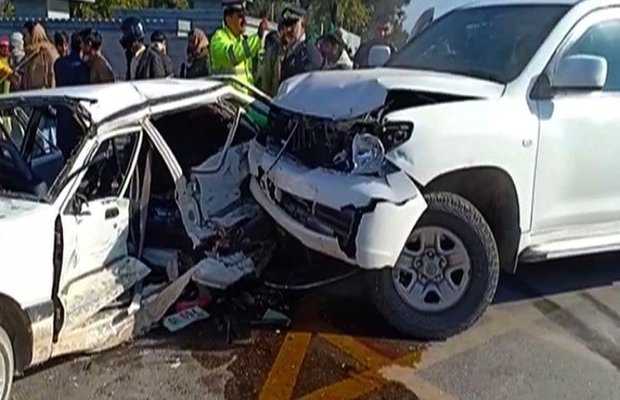 Police has arrested the driver of the vehicle, registered a case against him - OyeYeah News
0Share
486Views

A vehicle belonging to the United States Embassy was involved in a road accident in the federal capital on Sunday.

As the embassy vehicle, which was driven by a Pakistani driver hit a Suzuki Khyber car, and a woman is reported to be killed on the spot while the other 5 people were injured.

Police has arrested the driver of the vehicle, named Amjad Zaman and registered a case against him at the Margalla Police Station.

A spokesperson for Islamabad Police said the driver is a Pakistani citizen and action would be taken against the suspects in accordance with the law, they added.

As being reported, the deceased woman is identified as Nadia, and her son named Usama Ashfaq told the police that he came to know about the incident over a telephone call while he was on his way to his tailor shop in Sector E-11/3 of the capital.

When he arrived at the Pakistan Institute of Medical Sciences (Pims), he was informed that his mother had passed away while his father, Ikhlaq was also seriously injured in the incident.

Usama further told that Suzuki Khyber car was being driven by his cousin Shakeel Ahmed when hit by a Toyota Land Cruiser SUV, registration number ICTQL-654, near Faisal Avenue Chowk.

Shakeel Ahmed’s wife and his two daughters also sustained injuries in the incident.

He also claimed that Amjad Zaman, driver of the US Embassy vehicle, was driving recklessly.