US House of Representatives introduces Bill on Jammu and Kashmir

The bill was introduced by the US Congresswoman Pramila Jayapal 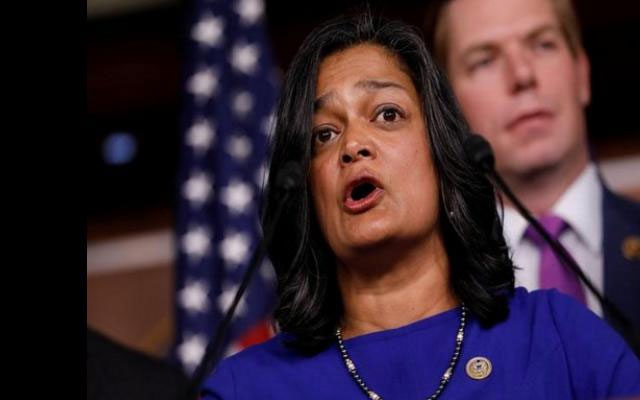 A bill on Jammu and Kashmir has been introduced in the US House of Representatives forcing India “to end the restrictions on communications and mass detentions in Jammu and Kashmir as fast as possible and preserve religious freedom for all residents.”

According to the details, the bill was introduced by the US Congresswoman Pramila Jayapal that has mentioned the Indian atrocities on the innocent Kashmiri people, informing the house that since 1989, Jammu and Kashmir has been the site of a 30-year conflict between the Indian government and local Kashmiris.

The bill mentioned that tens of thousands of lives of Kashmiris have been lost in the conflict by the Indian forces’ brutality.

“On August 5, 2019, the Government of India cut all telephone service and internet access in Jammu and Kashmir, the 53rd time the Indian government restricted communication in Kashmir in 2019,” the bill says.

It is further added by the Congresswoman, “the Government of India has stated that communications restrictions are required to stop terrorists from communicating with one another”.

The Indian government announced it had restored the landline phone service to Jammu and Kashmir on September 5, 2019, and partially restored cellphone service on October 14, 2019.

“Whereas 60 percent of the 6,000,000 mobile subscribers in Jammu and Kashmir rely on prepaid cellphones, which remain inoperable for communication, and text messaging and mobile internet services remain suspended.”

It notes that the people across the United States maintain ties with family and friends in Jammu and Kashmir and have reported difficulty contacting their loved ones owing to communications blockade.

“As the world’s largest democracy, India shares a unique and important relationship with the United States. I’m proud to have lived my own life in the world’s two greatest democracies–as a citizen of India for 35 years, and now as a proud American citizen and member of Congress,” Jayapal tweeted.

“I have fought to strengthen the special US-India relationship, which is why I’m deeply concerned. Detaining people without charge, severely limiting communications, & blocking neutral third-parties from visiting the region is harmful to our close, critical bilateral relationship,” the following tweet read.