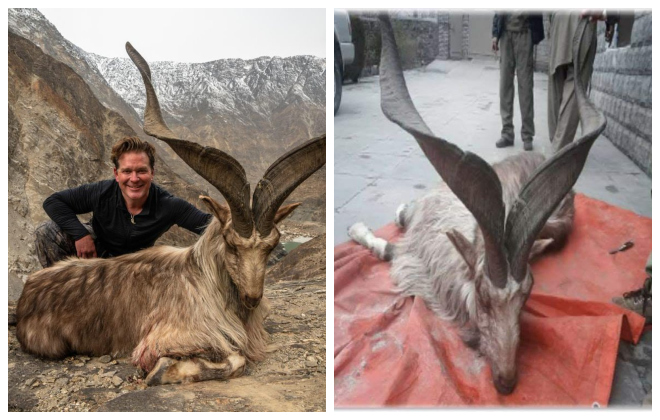 Third American citizen on Monday has hunted the highest-priced Markhor during the current hunting season (2018-2019) in Sassi village of Gilgit. 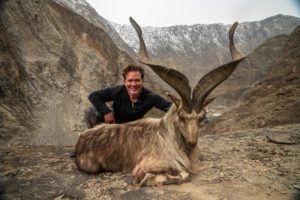 This was the third Markhor hunted by US citizen in Gilgit-Baltistan under trophy hunting program. The hunter paid $110,000 US dollars to get licenses for hunting of national animal of Pakistan.

This is so far the highest permit fee offered in the country. The foreign hunter managed to hunt a 41-inch Markhor trophy, which is considered a good-sized trophy. 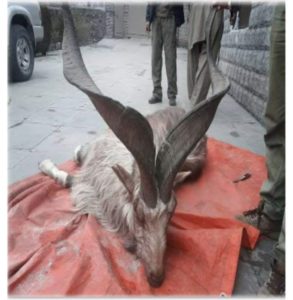 The previous two trophy huntsmen were also American, who paid thousands of dollars for permit fee for hunting Astore Markhore.

The first hunt was carried on Jan 21, by US citizen named Dianda Christopher Anthony. Who hunted the highest-rated Astore Markhor after paying 105,000 US dollars.

The second hunting expedition was carried out on Jan 16, by another American, John Amistoso. the endangered Astore Markhor was hunted in the community-controlled Bunji area of Gilgit, by paying the 100,000 US dollars permit fee.

Markhor is listed as a near threatened species in the International Union for Conservation of Nature’s Red List. It has a worldwide population of 5,754 and is found in Afghanistan, Jammu-Kashmir, Pakistan, Tajikistan, Turkmenistan, and Uzbekistan.

The brutal killing of rare wildlife animals continues in Naya Pakistan. As being reported so far above 50 endangered species have been killed!

Markhor the is Pakistan’s national animal, it is a distinctive species of wild goat identified by its long hair and spiraled horns. It is a protected species in Pakistan unless permitted by the government to kill it under trophy hunting programmes.

As being reported, the local authorities hand over 80 percent of the permit money to the respective local communities, while the remaining goes to the government exchequer.

According to Local chairman Hamid Hussain, the money earned from the hunt is spent on development of the area.

The local people now work to protect the animal instead of killing. The killings of endangered declared wildlife species have led to a drastic decrease in its numbers.

tweet
Share on FacebookShare on TwitterShare on PinterestShare on Reddit
Saman SiddiquiFebruary 6, 2019
the authorSaman Siddiqui
Saman Siddiqui, A freelance journalist with a Master’s Degree in Mass Communication and MS in Peace and Conflict Studies. Associated with the media industry since 2006. Experience in various capacities including Program Host, Researcher, News Producer, Documentary Making, Voice Over, Content Writing Copy Editing, and Blogging, and currently associated with OyeYeah since 2018, working as an Editor.
All posts bySaman Siddiqui