Biden had received the first dose of the vaccine last month live on national television. 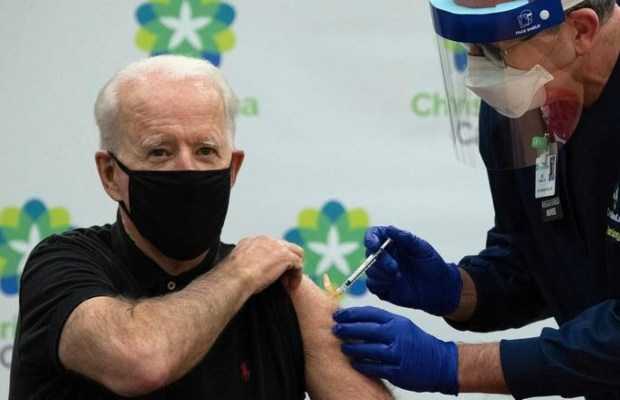 US President-elect Joe Biden has received his second Covid-19 vaccine dose on Monday.

The incoming president, 78, said that “I’m a little underdressed for my shot,” before removing his blazer,  he thanked the medic, and pulled up his sleeve for the injection of the Pfizer vaccine.

“My number one priority is getting the vaccine in people’s arms, as rapidly as we can,” he told reporters.

Biden was administered the shot in his left arm by Ric Cuming, chief nurse executive at ChristianaCare’s Christiana Hospital in Newark, Delaware, according to Biden’s transition team.
The President-elect’s vaccination comes the week before he is sworn in as the next president of the United States, and as the coronavirus pandemic continues to devastate the nation.
Biden had received the first dose of the vaccine last month live on national television.
The President-elect expressed his confidence in the vaccine and encouraged Americans to receive one as soon as it becomes available to them.
As of Monday afternoon, more than 374,500 Americans have died of the coronavirus virus, and cases are rapidly increasing across the country.
Vice President-elect Kamala Harris has also received the first dose of the Moderna vaccine on camera the week after Biden received his first shot in December.
As being reported, the incoming first lady Jill Biden and Doug Emhoff, Harris’ husband, have also received the first doses of the Pfizer/BioNTech and Moderna vaccines, respectively.
tweet
Share on FacebookShare on TwitterShare on PinterestShare on Reddit
the authorSaman Siddiqui
Saman Siddiqui, A freelance journalist with a Master’s Degree in Mass Communication and MS in Peace and Conflict Studies. Associated with the media industry since 2006. Experience in various capacities including Program Host, Researcher, News Producer, Documentary Making, Voice Over, Content Writing Copy Editing, and Blogging, and currently associated with OyeYeah since 2018, working as an Editor.
All posts bySaman Siddiqui