US Sends B-52 Bombers, Spectre Gunships To Stop Taliban From Seizing Afghan Cities

Taliban gathering was targeted by a B-52 bomber in Shebergan city of Jawzjan province last night. 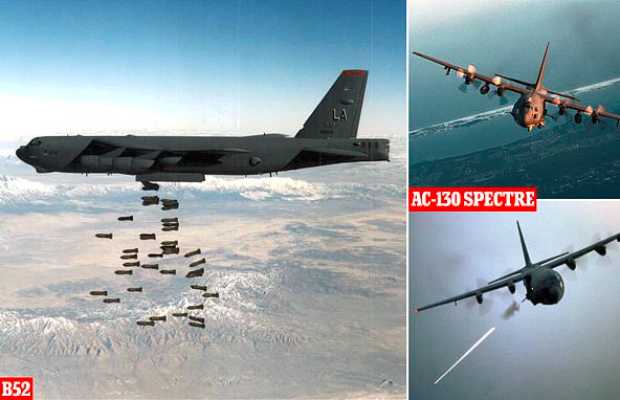 US Sends B-52 Bombers, Spectre Gunships to stop Taliban from seizing Afghan cities!

US President Joe Biden has ordered B-52 bombers and Spectre gunships to target Taliban terrorists in Afghanistan who are advancing towards three key cities, Daily Mail reported.

According to the news source, the Taliban faced heavy casualties when Afghan Air Force targeted their gatherings and hideouts in the city of Shebergan, killing 200 members of the terrorist outfit.

Taliban gathering was targeted by a B-52 bomber in Shebergan city of Jawzjan province last night.

20 years and $2tr of US interference, yet the Taliban simply walk over.
But indiscriminate B52 bombing will only kill more innocent Afghans. While resistance to Taliban appears futile, can Americans do anything right? pic.twitter.com/8D7yWp2EFc https://t.co/H7HPzMfxU1

As being reported, the US is operating B-52 bombers and AC130 gunships from a base in Qatar to halt the Taliban’s offensive as their forces are trying to capture Herat, Lashkar Gah, and Kandahar cities in Afghanistan.

The B-52s are operating out of Qatar, while the aircraft carrier USS Ronald Reagan is on deployment in the Arabian Sea. The nuclear-powered warship has a fleet of F/A-18 Super Hornets.

The Afghan Air Force is equipped with some turboprop light attack aircraft such as the A-29 Super Tucano, though only 30 pilots have been qualified since 2015.

The US Air Force continues to aid the Afghan air force’s bombing of Taliban targets in southern Helmand and Kandahar provinces, as Afghan security forces try to prevent a Taliban takeover, the report added.

At the time of filing this report, a news update emerges that the Taliban have overrun Kunduz, a city in northern Afghanistan that would be a significant military and political prize for the insurgents.

The Taliban have been advancing across Afghanistan after the US-led coalition pulled out of the war-torn nation. The development has left the country’s struggling defence forces to deal with the terrorists.

Earlier on Saturday, the Taliban captured Sheberghan city in Jawzjan.

It was the second provincial capital to fall to the insurgents over the past 24 hours after Zaranj fell on Friday.