‘Usman proposed to me but I refused to marry him’, she revealed 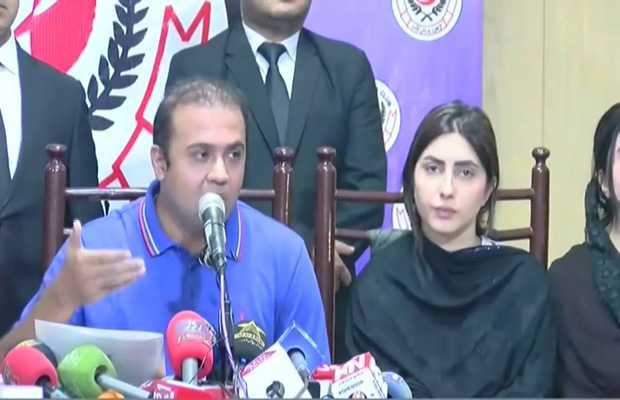 In wake of the recently leaked videos, actress Uzma Khan held a press conference in Lahore.

In the presence of their lawyers, Uzma Khan and her sister Huma told her side of the story after the women attacked her at home in along with armed guards.

She revealed that Malik Usman had proposed her which she had rejected and they have known each other for the last two years but were not on talking terms since December 2019.

Speaking at the presser she said, “His family is also aware of it and I have evidence to prove that Usman was constantly contacting me after December 2019. He proposed to me and I denied. Amna or anyone else in her family has never contacted me before 23rd May (it was the day when they attacked her). Usman is still calling and texting me and I will give evidence in court”.

Speaking at the press conference, Uzma’s lawyer Mian Ashfaq said, “We will be providing proof of the rental agreement to the police which is signed by Uzma’s friend Babar Nasim who is not at all related to Usman or his family.”

“Threatening with violence and intent to harm with arms is another non-bailable offense with 10 years imprisonment. Amna has accepted in her video that she barged into the house”, he further added.

“You can see the violence and threats in the video as well. Both these crimes are punishable but so far no arrests have been made,” Mian Ashfaq said.

Uzma Khan on Thursday filed a complaint against women who allegedly broke into her house with armed men and instigated violence against her and her sister.

tweet
Share on FacebookShare on TwitterShare on PinterestShare on Reddit
Saman SiddiquiMay 28, 2020
the authorSaman Siddiqui
Saman Siddiqui, A freelance journalist with a Master’s Degree in Mass Communication and MS in Peace and Conflict Studies. Associated with the media industry since 2006. Experience in various capacities including Program Host, Researcher, News Producer, Documentary Making, Voice Over, Content Writing Copy Editing, and Blogging, and currently associated with OyeYeah since 2018, working as an Editor.
All posts bySaman Siddiqui