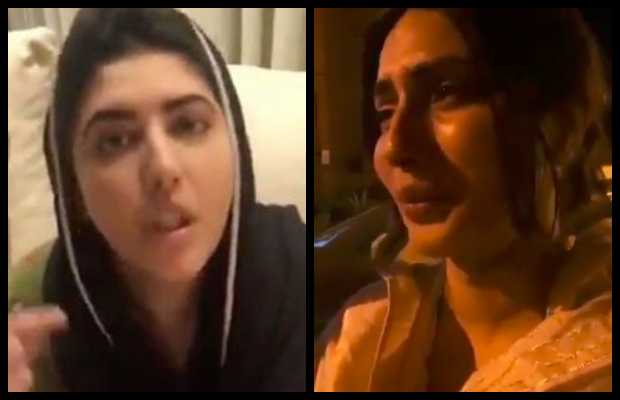 However, actress Uzma Khan on Thursday filed a complaint against women who allegedly broke into her house with armed men and instigated violence against her and her sister.

The unidentified women from the viral video clips were later claimed to be the daughters of business tycoon Malik Riaz.

Uzma Khan in her statement said:  “I have been shamed, harassed, been threatened to kill in the past 3 days. I feel like I have nothing to lose now and I have decided to fight the strongest people of Pakistan.

For me it is either I get justice or I get killed but there will be no turning back now.

I will fight against daughters… of Malik Riaz who stormed into my house around midnight with 12 gunmen. I request the police to register my FIR and conduct me and my sister’s medical examination before our wounds start to heal. I hope I am as much Pakistani as Malik Riaz”.

And hours after Uzma Khan’s filled complaint, a video statement was released by the woman claiming to be the wife of cheating husband Usman.

Amna Usman in her statement defended her stance of attacking Uzma Khan at her home and justified her actions.

Amna Usman said that she was the woman associated in the video and she has nothing to do with Malik Riaz. As per her claims that  Usman had no association with Malik Riaz and the barrister Hasaan Niazi was trying to extort money from the incident.

Furthermore, that house belonged to her husband and technically she had the right to brag into it and investigate Uzma Khan for having an affair with her husband, and according to her, she had been warning Uzma from a few months to stay away from him.

Amna further claimed that she has parted ways from Usman after this incident and she has an eleven-year-old son with him.

The social media is going haywire over the leaked video clips on social media, while many came calling out the attacker women and many supported them as well.

Its been a day or two that #UzmaKhan, #AmnaUsman, and #Usman are trending on top of twitter in Pakistan.

#AmnaUsman is totally lying on 2nd husband House . It was #UzmaKhan house proof is dresses in the room & cabinets were of uzma, they tried to burn them, when she said take out all the dresses and sheos out i will put them on fire .It shows she is lying to save her ass now. pic.twitter.com/SzXTcXFZYj

Appalling videos of #AmnaUsman including her half assed justification for behaving like a crazed lunatic. And NO every woman would not behave like you, otherwise your manic video would not have gone viral. Shocking behaviour & subsequent entitlement is a jaw dropper #MalikRiaz

tweet
Share on FacebookShare on TwitterShare on PinterestShare on Reddit
Saman SiddiquiMay 28, 2020
the authorSaman Siddiqui
Saman Siddiqui, A freelance journalist with a Master’s Degree in Mass Communication and MS in Peace and Conflict Studies. Associated with the media industry since 2006. Experience in various capacities including Program Host, Researcher, News Producer, Documentary Making, Voice Over, Content Writing Copy Editing, and Blogging, and currently associated with OyeYeah since 2018, working as an Editor.
All posts bySaman Siddiqui