A great loss for Pakistani journalism! 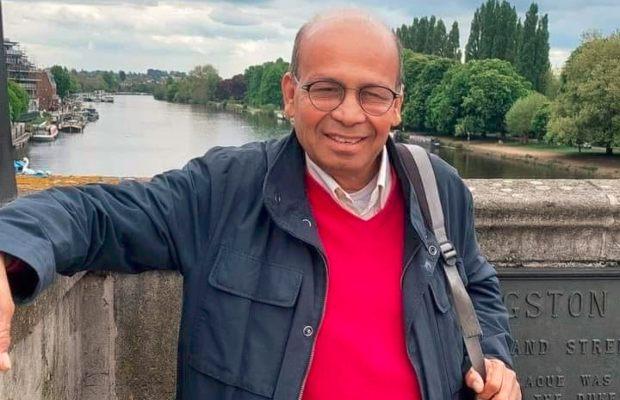 The senior journalist had been associated with Geo News from the first day of its inception.

As reported, he suffered a heart attack in Brussels after arriving from London that proved to be fatal.

According to family sources, Khalid Hameed Farooqi had been suffering from a heart condition for some time.

He served as the Bureau Chief Geo TV Europe and was known for his reporting on international affairs.

He covered important issues of various countries exceptionally. Coverage of the French presidential election was among his recent prominent work.

The deceased was the only Pakistani journalist to have covered the Russia-Ukraine conflict from the war zone.

Khalid promoted Urdu journalism not only in Brussels but all over Europe. He was one of the best correspondents abroad.

Hailing from Karachi he had moved to Europe at an early age and was a graduate of Karachi University.

He was not a person but an institution for junior journalists because whenever any issue was discussed he knew about its status.

“Khalid Hameed Farooqui was a veteran journalist who loved his profession,” he said, adding that his death is a great loss for the field of journalism.

“His journalistic services will be remembered for a long time,” the premier said.

Condolences pour in for the late Farooqui who had spent decades in the field of journalism.

News about the death of GEO correspondent in Belgium,Khalid Hameed Farooqi was devastating. A former NSF leader, a thorough professional and a personal friend. May Allah bless his soul and give family strength to bear the huge loss. We Will miss you khalid.

A sweet memory with late Khalid Hameed Farooqi & Amir Rana at a seminar in Free University Amsterdom organised by Overseas Progressive Pakistanis (OPP) in 2018. ⁦⁦@FarooqiKH⁩ was a great journalist who always struggled for media freedom. May Allah rest his soul in peace pic.twitter.com/SAKhmSjQlb

Such a terrible news. Best friend, comrade, and frontline journalist Khalid Hameed Farooqi @FarooqiKH is no more with us. Can't believe. We spent several hours together just on Wednesday. What a loss! pic.twitter.com/aTlhY5VBhy

A very dear colleague, wonderful being, a thorough professional journalist, Geo’s correspondent in Belgium, Khalid Hameed Farooqi has passed away. Inna Lillahi wa inna ilayhi raji'un.
He will always be remembered for staying firm to his journalistic principles. pic.twitter.com/XttHHRBiqp

tweet
Share on FacebookShare on TwitterShare on PinterestShare on Reddit
Saman SiddiquiMay 7, 2022
the authorSaman Siddiqui
Saman Siddiqui, A freelance journalist with a Master’s Degree in Mass Communication and MS in Peace and Conflict Studies. Associated with the media industry since 2006. Experience in various capacities including Program Host, Researcher, News Producer, Documentary Making, Voice Over, Content Writing Copy Editing, and Blogging, and currently associated with OyeYeah since 2018, working as an Editor.
All posts bySaman Siddiqui