Traffic police have decided to pursue action against her for the violation of traffic rules and misbehaving and abusing an officer. 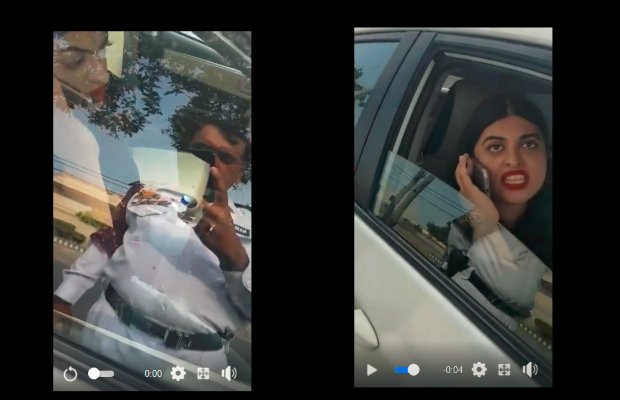 A video of a woman misbehaving with traffic police is doing rounds on social media, drawing public anger.

The unidentified woman not just broke the traffic rules but after being stopped by the traffic police not just uses foul language but also insults the on-duty traffic sergeant.

The woman can also be seen making phone calls and asking someone to help her out at the situation, and at the same time verbally abuse the traffic police, calling names and threatening him.

From the video, it came to light that this incident occurred in the metropolis’ upscale Defence Housing Authority (DHA) neighborhood,  and apparently the car belonged to some big shot!

Reportedly,  the traffic police have decided to pursue action against her for the violation of traffic rules and misbehaving and abusing an officer.

The set of videos of this incident is being uploaded on various social media platforms, drawing criticism and anger. As the number plate of the vehicle is clearly shown in the video, some people were quick to trace out its owner with the help of the website.

Someone has also uploaded the info on the Facebook group, where these videos were shared! The car is registered to a person named Pir Roshan Din Shah Rashdi.

Let’s wait to find out if legal action is taken in this particular case, as we all know in a country like Pakistan, might is right, the powerful do not care for the law.