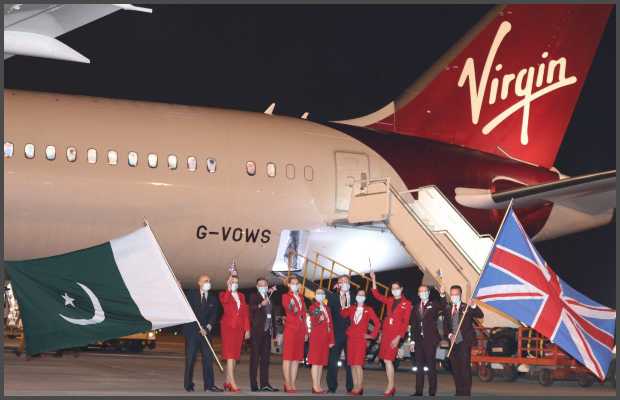 The first flight of British airline Virgin Atlantic has landed at the Islamabad airport on Friday, after announcing that it will be commencing direct flights between the two countries.

The airliner will use Airbus A-332 aircraft to continue a weekly eight-flight operation in Islamabad and Lahore.

Bauhat Mubarak 🇵🇰 ! With @sayedzbukhari at touch-down of the first @VirginAtlantic flight. From 0 🇬🇧 flights to 20 a week is a sign of confidence in Pakistan #UKPakDosti pic.twitter.com/fS9hfOHINM

Marking the occasion the SAPM Zulfikar Bukhari said after British Airlines, Virgin Airlines is the second-largest airline in the UK to launch a series of flights to Pakistan.

He added that this will further enhance the scope of relations between Pakistan and the United Kingdom, and this will boost trade and even trade ties between the two countries.