Virgin Galactic successfully flies to the edge of space 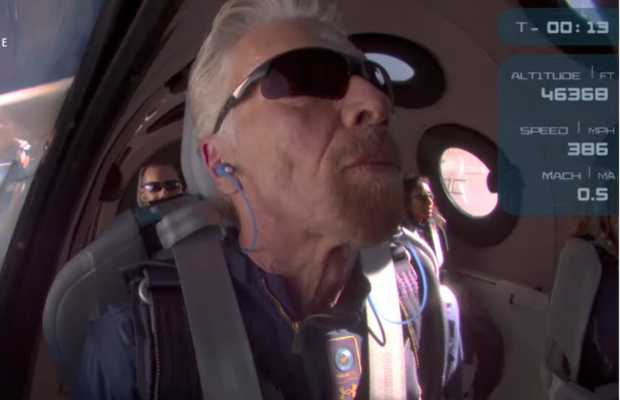 Welcome to the dawn of a new space age #Unity22 @virgingalactic pic.twitter.com/Rlim1UGMkx

On Sunday morning, a twin-fuselage aircraft with its space plane attached underneath took off in the first stage of the flight around 7:40 a.m. PT from the Spaceport America facility in Truth or Consequences, New Mexico.

The space plane detached from the mother ship at an altitude of about 8 1/2 miles and fired its engine, reaching the edge of space at about 53 miles up.

Branson and his crew reached an altitude of about 53 miles, enough to experience three to four minutes of weightlessness and see the curvature of the Earth, before heading back for a safe landing.

The plane touched down in the New Mexico desert about an hour later, after achieving speeds of more the three times the speed of sound and vaulting up more than 282,000 feet above Earth.

“Seventeen years of hard work to get us this far,” Branson said as he congratulated his team on the trip back.

The feat vaults the nearly 71-year-old Branson past fellow billionaire and rival Jeff Bezos, who is planning to fly to space in a craft of his own nine days from now.

Branson became the first person to blast off in his own spaceship, beating Bezos by nine days.

He also became only the second septuagenarian to depart for space. (John Glenn flew on the shuttle at age 77 in 1998.)

The London-born founder of Virgin Atlantic Airways received best wishes from his rivals in the field ahead of the historic journey.

Branson’s chief rivals in the space-tourism race among the world’s richest men, SpaceX’s Elon Musk, had arrived in New Mexico to witness the flight, he wished Branson via Twitter, “Godspeed!”

Another one of Branson’s chief rivals, Bezos posted his best wishes to Branson on Instagram.