The cowardly attempt against Pakistan would be made between April 16 and 20, Foreign Minister 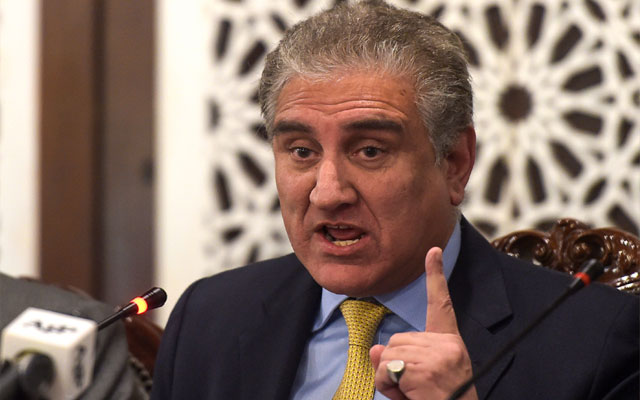 Ever since Pakistan Air Force’s (PAF) pilots downed two Indian jets and captured IAFs wing commander Abhinandan Varthaman, who was later handed over to India on March 1st as a gesture of peace, the world leaders have acknowledged Pakistan’s move to maintain peace in the region. India on the other hand, at the International level has failed to prove its claim of downing Pakistan’s F-16 aircraft as well as holding Pakistan responsible for Pulwama attack.

The neighbouring country seemed entirely shook up and perplexed over the ongoing situation. India has been lost in the “self-made melodrama”, aimed at whipping up war hysteria in the region and increase diplomatic pressure against Pakistan.

Pakistan’s Foreign Minister Shah Mehmood Qureshi on Sunday revealed that India is planning for another cowardly attack on Pakistan between April 16 and 20. The minister was addressing at the press conference in Islamabad.

He said that Pakistan has informed United Nation’s  Security Council (UNSC) about the secret plan of India.

“We have reliable intelligence that India has made a new scheme and the planning is underway.” He said during the press conference.

“There are chances of another aggression against Pakistan and according to our information; this action can takes place between April 16 and 20.” Qureshi added.

“I am saying it with responsibility and I have a responsible position, I know each word I say would make headlines in the international press,” the Foreign minister stressed.

The minister was asked what would be Pakistan’s response to this.

“We reserve the right to self-defense,” the minister replied in a bold and undoubtedly statement.

The minister urged the need of international powers to play a role rather than being silent. He told that the Foreign Secretary has contacted China, Russia and UK to inform them of Pakistan’s concerns.