Its been 4 months as the internet service is suspended in Indian Occupied Kashmir. 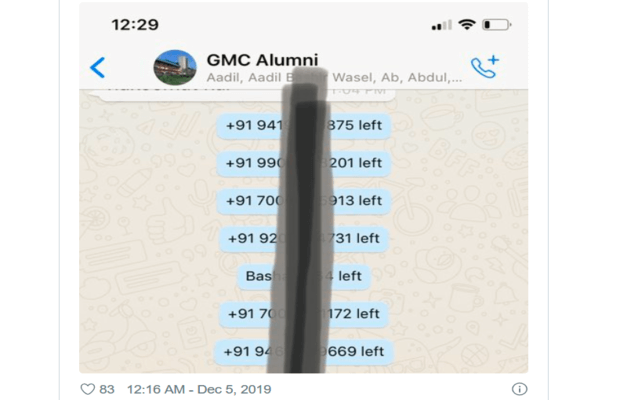 WhatsApp accounts owned by Kashmiris in Indian occupied region are being deleted automatically. The report of this latest development surfaced on social media on Wednesday as Kashmiri WhatsApp users leaving group chats in large numbers.

This came as a surprise to friends and relatives of Kashmiris who were outside the Indian Occupied Kashmir region. It comes after as India has shut down Kashmir’s internet for over four months as part of a dispute over the area’s autonomy.

Though many considered that this might be because of a further crackdown by Indian authorities, however, that’s not the case.

According to the Buzzfeed report, the accounts are being automatically removed in line with Facebook’s inactivity policy.

A spokesperson for Facebook told BuzzFeed News that, “To maintain security and limit data retention, WhatsApp accounts generally expire after 120 days of inactivity.

When that happens, those accounts automatically exit their WhatsApp groups. People will need to be re-added to groups upon regaining access to the Internet and joining WhatsApp again”.

Apparently, as per the WhatsApp policy, inactive accounts are deleted after a certain period of time. And after 4 months of Internet shutdown, this started to happen.

According to an estimate around one percent of India’s smartphone users live in Kashmir, which means millions are likely affected by the deactivation policy.