The gunman identified as 18-year-old Payton S. Gendron of Conklin, was taken into coustody 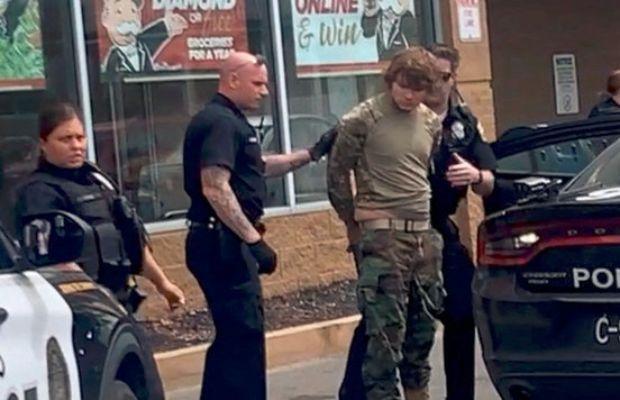 A white gunman killed 10 people in a live-streamed racial attack at Buffalo, N.Y., supermarket on Saturday.

While three others were critically injured.

The 10 people killed and three injured, were almost all of them Black Americans, in one of the deadliest racist massacres in recent American history.

The authorities identified the gunman as 18-year-old Payton S. Gendron of Conklin, a resident of a small town in New York’s rural Southern Tier.

The man had driven more than 200 miles to carry out his attack, which he also live-streamed, the police said.

Mr. Gendron was armed with an assault weapon and wore body armor, the police said.

As reported,  a white supremacist terrorist live-streamed the video of the attack.

Following the attack, the Twitter timeline is laden with all sorts of reactions.

BREAKING: In his manifesto, the white supremacist mass shooter who live-streamed himself shooting 9 people at a Buffalo, New York supermarket, killing 2, reveals that he was motivated to do so by the “white replacement theory” that has been pushed by Trump. RT TO EXPOSE TRUMP!

If you speak on what happened in #Buffalo be sure to call it what it was.

A terrorist attack, orchestrated by a white supremacist.

My heart is broken for Buffalo ❤️💙

So the white man with the big gun and tactical gear was taken into custody alive after killing a bunch of black people?? Interesting…. #Buffalo #HateCrime https://t.co/23qlHReZal

Pearly Young, 77, was killed today in #Buffalo shopping for groceries.

For 25 years she ran a pantry where every Saturday she fed people in Central Park. Every. Saturday.
She loved singing, dancing, & being with family.

She was mother, grandma, & missionary. Gone too soon 🕊 pic.twitter.com/dQ5X9KBJCQ

They’re going to try to claim this guy is crazy but he live streamed the whole thing (this video does NOT show the shootings)! Buddy had a manifesto, planned it all out, everything. Targeted the majority black store specifically #Buffalo

This is what I see when I hear the suspect was taken into custody. #Buffalo #BlackLivesMatter pic.twitter.com/umlU1AindW

he had everything planned out this is so sad, we really get targeted for no reason smh. at a local grocery store, this is america. #Buffalo #Shooting #massshooting pic.twitter.com/Dc8ZU00w5m

I’m confused how this murderous scum gets to live after killing innocent people. He should be dead not in handcuffs. Black people are shot and killed by police officers after a traffic stop so make this shit make sense. #Buffalo #TopsSupermarket #NY pic.twitter.com/QALeeyOQL8

Call him what he is. He’s not a teenage gun man, he’s a white suprematist. A domestic terrorist who is responsible for the murders of innocent lives. Use the correct terminology when describing this low life piece of shit #Terrorist #buffalonewyork #Buffalo #BuffaloMassacre #blm https://t.co/hHdOTzUP5Z