You are a terrible person, Trump hits out at CNN reporter before banning his White House entry 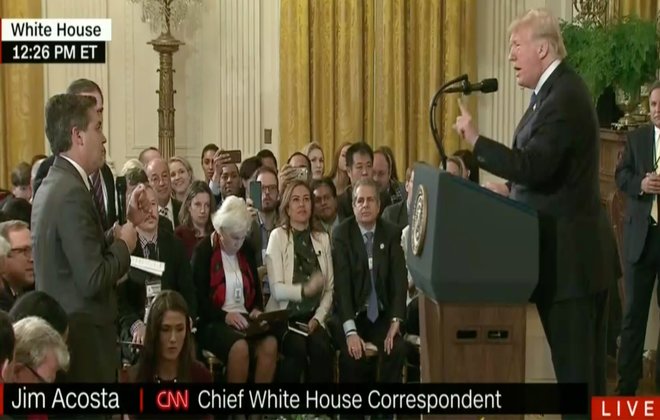 The White House has suspended the press pass of CNN correspondent Jim Acosta.The ban comes after Acosta and President Donald Trump had a heated confrontation during a news conference.

It all started on Wednesday, after Jim Acosta asked Trump about the caravan of migrants heading from Latin America to the southern U.S. border. And Acosta is also being accused of assaulting the internee who tried to take mike from his hand.

The conversation which occurred during the press conference was watched by millions all across the globe.

On the question Trump replied: “No, I want them to come into the country. But they have to come in legally”.

Acosta persisted, saying: “They are hundreds of miles away. That is not an invasion”.
At that point, the president cracked, “Honestly, I think you should let me run the country. You run CNN, and if you did it well, your ratings would be higher”.

As the reporter tried to continue, to which Trump declared: “That’s enough, put down the mic” and walked away from his own podium, as if leaving.

Waving his finger, Trump, criticized him. “I’ll tell you what, CNN should be ashamed of itself having you working for them. You are a rude, terrible person. You shouldn’t be working for CNN”, said POUTS.

When NBC reporter Peter Alexander took the mic for the next question, he tried to defend Jim Acosta as a “diligent reporter”, was enough to trigger Trump’s ire.

“I’m not a fan of yours either. To be honest. You aren’t the best”, he said.
Looking back at Acosta, who again rose up in his own defense, Trump added: “When you report fake news, which CNN does a lot, you are the enemy of the people”.

In a statement CNN presented with its response, saying, “this president’s ongoing attacks on the press have gone too far”.

And there is a massive response to this development on social media as well:

.@realDonaldTrump has put more energy & resources into banning @Acosta than he has into keeping Americans safe from an epidemic of Radical Domestic Terrorism that is killing Americans in cold blood by the hundreds. #GunControlNow

The American people will not stand for the lies told on behalf of this administration. I was there. @Acosta was not inappropriate. But the president was. He is president Donald Trump. Not KING Trump. @realDonaldTrump https://t.co/MOH8LjnWYC

WH just released a doctored video of a POTUS press conference, in an attempt to rewrite reality, and justify Trump's ignorant treatment of @Acosta, the revoking of his credentials, and @PressSec's lies about Acosta's conduct.

But sure, Hillary would have been worse…

Sarah "Goebbels" Sanders is now spreading doctored video from Infowars to try to claim that Jim Acosta assaulted a WH intern. Apparently the Trump WH don't understand that it's only their cult members who will ignore their own eyes & ears to believe anything the Trump admin says.

The White House banning Jim Acosta proves he didn’t assault a woman because Trump likes guys who do that.

I don’t know why anyone is surprised Jim Acosta lost his hard pass. The Trump Administration was clearly waiting for him to mess up so they could take it away.

Hmm. @realDonaldTrump loves Gianforte for beating on a journalist but, when Jim Acosta inadvertently touches a White House aide and says “Pardon me, Ma’am” when she tried to grab the mic, @PressSec puts out a doctored video …? #uspoli #media https://t.co/oE7EAN89ZJ