Pakistan who seven points from as many games and are in contention for the semi-finals, facing already eliminated Afghanistan. 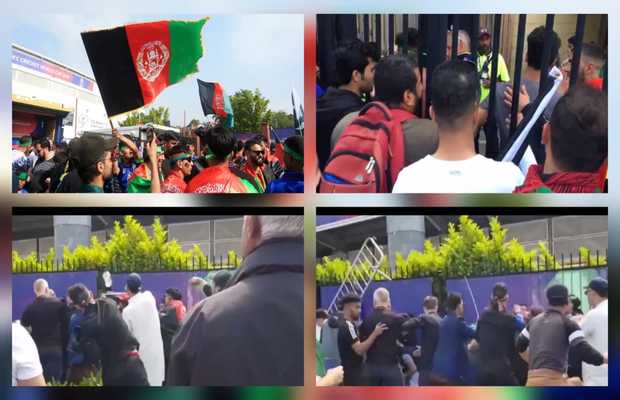 Few ugly scenes have emerged from outside the Leads Stadium as Pakistan is playing against Afghanistan in a crucial World cup 2019 match.

A few Afghan supporters were seen attacking Pakistani fans inside and outside Headingley cricket stadium in Leeds.

We are aware of some scuffles among a minority of fans and are currently working with the venue security team and the local police force, West Yorkshire Police, to ensure there are no further incidents,” an ICC spokesperson said.

“We do not condone this type of behaviour, and will take appropriate action against any anti-social behaviour that spoils the enjoyment for the majority of fans.”

Video footages of the incident from outside the ground show Afghanistan fans attacking  Pakistani supporters.

Few reports claim that some Afghan fans tried to enter the stadium illegally, without any tickets.

Few of the Afghan supporters were ejected from stadium by security; many invaded the stadium jumping the wall, occupying seats without tickets.

While I was making footage of Afghanis attack on Pakistani spectators.The angered crowd manhandled me as well.Tried to snatch mobile phone and pushed me several times.Thanks to security for timely response.Surprised and shocked to see such hatredness towards Pakistanis. pic.twitter.com/zPzCWxlgYW

I have covered hundreds of international games, never seen such pathetic behaviour, full of hatred and abuses, they even harassed Pakistani journalists, manhandled @makhdoomab outside the ground. Such hostility isn’t seen even in India Pakistan games. https://t.co/yM8UJpgrOQ

This violent behaviour by Afghani supports has left cricket fans all over the world in shock, and seems to be one of its kind incedent in recent cricket history.

tweet
Share on FacebookShare on TwitterShare on PinterestShare on Reddit
Saman SiddiquiJune 29, 2019
the authorSaman Siddiqui
Saman Siddiqui, A freelance journalist with a Master’s Degree in Mass Communication and MS in Peace and Conflict Studies. Associated with the media industry since 2006. Experience in various capacities including Program Host, Researcher, News Producer, Documentary Making, Voice Over, Content Writing Copy Editing, and Blogging, and currently associated with OyeYeah since 2018, working as an Editor.
All posts bySaman Siddiqui