News anchors, beware. The robots are coming for your jobs, too. 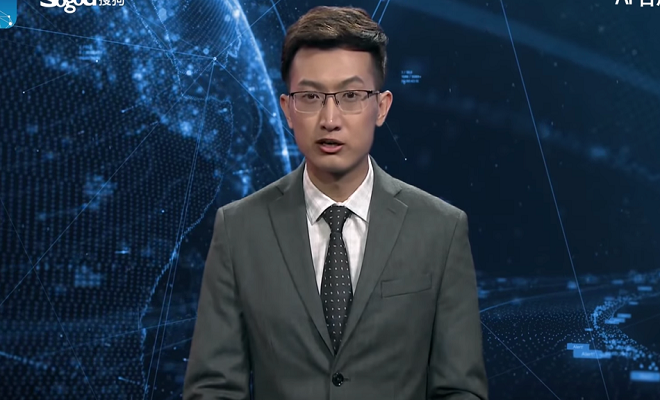 The new anchors at China’s state-run news agency have perfect hair and no pulse.

Hello, you are watching English news programme,” says the English-speaking presenter at the start of his first report.

Sogou, a Chinese search engine, was involved in the system’s development.

“I will work tirelessly to keep you informed as texts will be typed into my system uninterrupted,” says the presenter in his introductory video.

“I look forward to bringing you the brand new news experiences.”

The anchor was designed to simulate human voice, facial expressions and gestures.

The AI news reader “learns from live broadcasting videos by himself and can read texts as naturally as a professional news anchor,” according to Xinhua.

The news agency said the simulations can be used on its website and social media platforms and will “reduce news production costs and improve efficiency.”

It didn’t say whether any of China’s state-run TV channels have shown interest in acquiring the technology  for usage into the future.

The English-speaking anchor, complete with a suit and tie, is modeled on a real-life Xinhua anchor called Zhang Zhao.

A Chinese-language version, which is based on another real-life Xinhua anchor, was also unveiled at the conference.

The robots are supposed to help cut costs and improve efficiency, but their presence in the media landscape — marked by limited press freedom and tightly controlled Internet — raises many questions about the quality of information Chinese citizens are given by their government.

While Xinhua claims the virtual anchor is a world first, it is not the first time that Chinese media has experimented with AI technology.

In 2015, China’s Dragon TV used Microsoft’s XiaoIce chatbot to deliver a weather report on its live breakfast show. The AI computer program delivered the forecast in a “cute” female voice, according to Xinhua.

Advanced software programs scrape sources like corporate earnings reports and baseball box scores and then transform the data into sentences that humans can understand.