"I will not beg for anything. The case is before this court and I left on the court to decide it," Yasin Malik 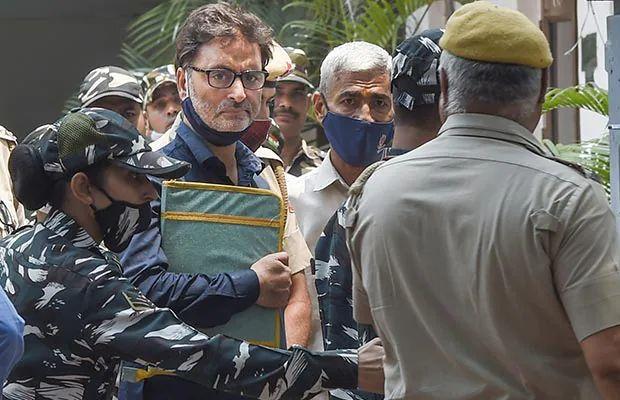 As reported the arguments in the high profile case were concluded in the case and the court was due to give its verdict at 3:30 pm local time today.

“I was arrested within 30 minutes of Burhan Wani’s encounter. Atal Bihari Vajpayee allotted me a passport and India allowed me to make a statement because I was not a criminal,” Yasin Malik said in court.

The judge said that no case was going on against Yasin Malik before this one.

Malik also said that he has followed the principles of Mahatma Gandhi ever since he gave up arms in 1994. “I have been doing non-violent politics in Kashmir ever since,” he said.

Claiming that he has worked with seven Prime Ministers, Yasin Malik challenged the Indian intelligence agencies to point out if has been involved in any terror activities or violence in the last 28 years.

Yasin said. “if I have been involved in any terrorist activity or violence in 28 years, if Indian Intelligence proves this, then I will also retire from politics.”

On the demand by NIA for the death penalty to the Kashmiri leader, Yasin Malik said, “I will not beg for anything. The case is before this court and I left on the court to decide it.”

In wake of the court’s decision, a partial strike was observed in Srinagar, the hometown of Yasin Malik.

Shutdown in parts of Srinagar, #Kashmir ahead pronouncement of the quantum of punishment for Kashmiri separatist leader Yasin Malik, who was convicted in a “militancy funding” case a few days ago. pic.twitter.com/PaOMg4KOUQ

Family member of #YasinMalik chairman of banned separatist organisation reading Quran at the window of their residence in Maisuma #Srinagar ahead of court's decision on his conviction in a terror funding case.#Kashmir pic.twitter.com/p5lfci3u9W

Moments ahead of the court trial in Delhi, the sister of JKLF chief Mohammed Yasin Malik recites Quran at her residence in Srinagar's Maisuma locality.

The court will decide the quantum of punishment for the JKLF chief at 4 PM today. pic.twitter.com/MkWQnH5M6F