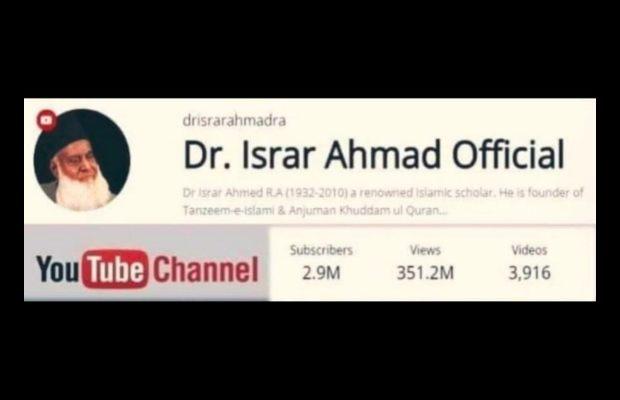 A youtube channel named Dr. Israr Ahmad had uploaded the original lectures delivered by the late scholar on various occasions.

The channel had also received  Silver and Golden buttons as well for having almost 2.9 million subscribers.

As being reported, the world’s biggest video sharing platform has taken down the official YouTube channel of renowned Islamic scholar Dr. Israr Ahmad over allegations of carrying anti-Semitic comments.

“The removal of Dr. Israr Ahmad’s Official YouTube channel is a blatant act of Islamophobia. Tanzeem-e-Islami has commenced a robust legal and procedural action in response to this shameful act on all relevant and concerned platforms,” Tanzeem e Islami said in a statement.

Asalamu Alaikum WrWb.
Removal of the Dr. Israr Ahmad Official #YouTube channel is a blatant act of #Islamophobia. Tanzeem-e-Islami has commenced a robust legal and procedural action in response to this shameful act on all relevant and concerned platforms.
Was Salam pic.twitter.com/KB5wpA8gNl

YouTube in a statement released on Friday said that it has removed two channels of Dr. Israr Ahmed.

YouTube also removed Egyptian scholar Wagdy Ghoniem who said that those who had “collaborated” with Nato forces in Afghanistan deserved to be punished by the Taliban.

The development has left the followers of Dr. Israr Ahmad furious.

What our Holy Prophet (PBUH) has said will come true#Islamophobia #Bajwa pic.twitter.com/fzk0Rtyztx

Dr. Israr was an ocean having complex knowledge of Islam. I personally love him most than any other scholar. What youtube have done is a stupid step and against the freedom of speech.#RestoreDrIsrarYoutubeChannel#DrIsrarAhmad@Youtubecreators pic.twitter.com/Tx7K79nhPo

"Dr.Israr Ahmad official" channel terminated by youtube. Channel had 2.9M subscribers and 3k Videos. The channel was an asset to muslim world. The jewish chronicle celebrating it as a victory.Let's get this issue trending and re build his channel.#restoredrisraryoutubechannel pic.twitter.com/dSGSZOQLz5

YouTube deleted Dr Israr Ahmeds YouTube channel with 2.9 Million subscribers. He was an enlightened and strong scholar of Islam. His lectures taught millions. This is outrageous! YouTube must immediately restore the channel. #RestoreDrIsrarYoutubeChannel #غداروں_کو_گرفتار_کرو pic.twitter.com/MXDqozjlgF

Khaled Hassan claimed that YouTube ignored his requests when he flagged up the content, which carried hate towards Jews.

The Muslim YouTube moderator in an interview with the publication said that he had repeatedly raised the issue of anti-Jews content on YouTube – including flagging Dr. Ahmad, however, his concerns were ignored.

He went on to add that  Dr. Ahmad’s lectures carried comments, such as “Jew World Order” and described Jews as “cursed people” or “cursed race” who had conspired against Muslims for centuries and that they were “followers of Satan, intent on destroying Islam”.

The Jewish Chronicle stated that Malik Faisal Akram took four people hostage at gunpoint in a Texas synagogue in January after he had watched Israr Ahmed’s videos.