Imkaan Welfare Organization's 'Khel Ghar' intends to provide productive avenues to the children of Machar colony who are often times exposed to life's most wretched realities. 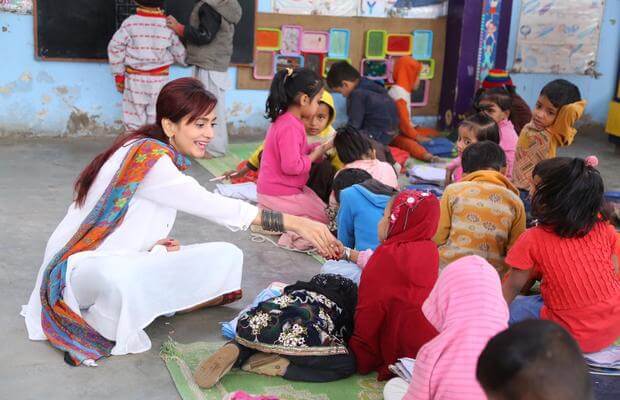 Zarnish Khan is already known for playing leading roles in various entertaining dramas over the years. Due to her outstanding performance in 2015, she was awarded the Best Soap actress by HUM Awards. Moreover, she is currently working on four mega drama serials namely ‘Ishq Zahenaseeb,’ ‘Jo Tu Chahey,’ ‘Mohabbat Na Kariyo’ and ‘Ye Dil Mera.’ Zarnish Khan visited ‘Khel Ghar’ to spread a plethora of smiles amidst children of Machar colony where she also was joined by the founder of Imkaan Welfare Organization, Taheera Hasan.

Imkaan Welfare Organization’s ‘Khel Ghar’ intends to provide productive avenues to the children of Machar colony who are often times exposed to life’s most wretched realities. These include various activities that benefit children physically, intellectually and emotionally.

Prior to this visit, Zarnish Khan was also invited to NUST University where she shed some light on the status of women in media as well as motivated the young students of the university to aspire for more. She mentioned, “You will have your fair share of struggles and hurdles but to be able to overcome those is all dependent on you and your willingness to go the extra mile.”

The superstar Zarnish Khan is also currently working on multiple projects and will also be participating in Bridal Couture Week.

Keep posted for details about her ramp walk.