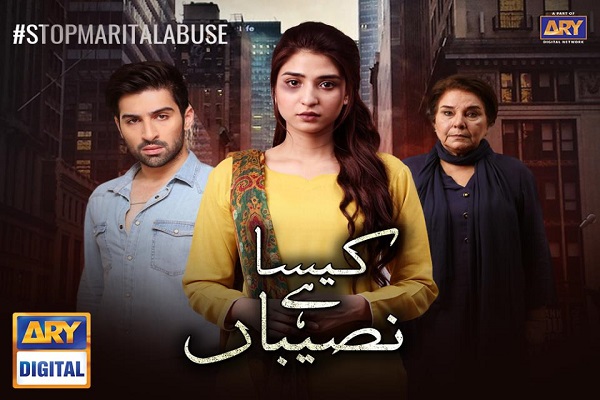 Its high time that Kaisa Hai Naseeban moves towards its end now. Although we wait for Mariam and Ahmed’s situation to be resolved first, we do want to see a happy ending for the poor soul Mariam who has only had badluck up until now. An engaging story of a domestic abuse survivor, Kaisa Hai Naseeban has acted as an eye opener through its journey and as it ends next week, we feel happy for Mariam who has survived everything with a brave front.

It is shown that Mariam is getting stronger and Affan plays an important role in bringing her back to life. All is going smooth but then Affan’s mother starts objecting Affan’s  involvement in Mariam’s affairs afraid that Affan still has some feelings for her. The worst part is that Farah over hears all this conversation and she reacts very strongly. Despite Affan’s explanation, Farah doesn’t pay heed at all.

Mariam on the other hand is getting better and stronger but it seems like her soul is scarred forever and the past memories keep haunting her. It has shown that how Mariam gets scared on the mention of the name Ahmed in her office. It is just a name which reminds her for her bitter memories. It truly reflects the feelings of an abusive relationship victim whose fear never isolate her and the past memories keep haunting her for the rest of her life! Poor Mariam keeps dreaming of being physically hurt by Ahmed as well.

On the other hand Farah’s over reaction seemed dragged  as she is not ready to listen to Affan nor his mother! Then there is a scene where she goes to the height to suggest Affan to leave her and marry Mariam. However, Affan snubs her and warns her not to repeat this again as he has now feelings only for her and Mariam is just a cousin. Well Farah makes Affan a promise that he will never leave Mariam alone in her hard times and will keep supporting her the way he does. Affan promises to do so.

Ahmed seems fed up and tired working at the mediocre Dhabba where he is getting no chance of showing his true colors. He tries to call her mother and sister but they are not receiving her call as his mother is in hospital and he is not aware of the fact. Ahmed makes up his mind that he won’t spare Mariam so he very shamelessly enters into Mariam’s house and starts his ugly slandering about Mariam’s character. However,  when Mariam’s father snubs him, he starts claiming that Mariam is his wife. Upon Mariam’s insistence of a divorce, he gets mad and claims his right in their house.

Muneeb Butt as Ahmed has been stupendous throughout and so has Ramsha Khan. Agha Mustafa is a convincing actor and we like him in his role as Affan. For this episode we missed Uzma Gillani’s evil self but we’re certain there’s something she’ll do in the last episode to try and set things right for her own children.

tweet
Share on FacebookShare on TwitterShare on PinterestShare on Reddit
Rameeza NasimMarch 28, 2019
the authorRameeza Nasim
Rameeza Nasim, a Paralian, poet, passionate about poetry, drama and fiction. By giving drama critiques I feel like I am endorsing the writer's message to the audiences and also stressing on what Writers trying to say through his character portrayals and story, I love my job. Being a critic responsibility lies on my shoulders to point out the flaws and shortcomings of the play be it on writer's , performers or director's end . I did my Masters in English Literature and Linguistics and I earn my living through writing.
All posts byRameeza Nasim 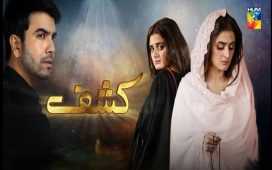