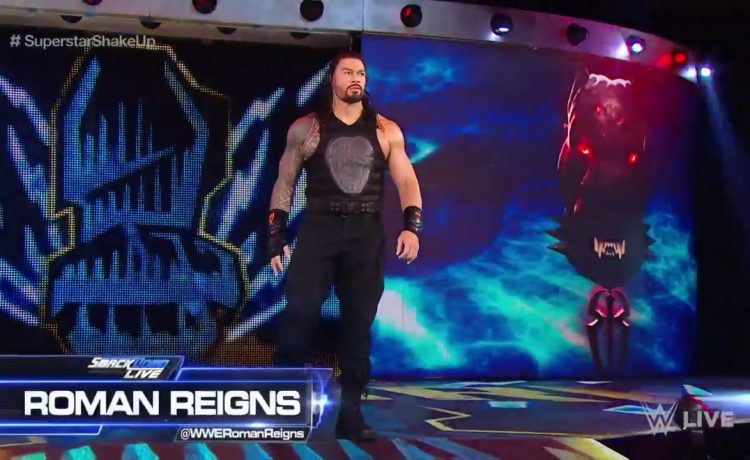 Owens arrives to a huge reaction for their hometown hero. Owens congratulates Kofi and leads the crowd in a standing ovation. Kofi thanks him and says Mania was so special to him, and thanks the fans. Owens brings up Big E is missing, and Woods says Big E is injured.  Owens wants to join New Day tonight, and Kofi asks if he’ll wear a crop top. Woods says he needs to work on pancake throwing and video games as well as his wiggle. This was a solid and fun opening segment. Will Owens turn on New Day?

Cesaro offers to be back up for Rusev & Nakamura. –  Finn Balor joins Smackdown.

Champion Finn Balor defeated Ali. This was a very good and fun match, with Ali looking great against Balor.

Truth is at ringside. Charlotte attacks with kicks and yells about hating Canada. Carmella battles back and hits the superkick for 2. Charlotte defeated Carmella submission this was okay, with Charlotte picking up the expected rebound win and the women’s battle royal winner already losing.

Lars arrives to kill Truth. Truth tries to fight him off, but Lars laughs and hits freak accident. Lars doesn’t care about brand affiliation. He then Liger bombs Truth. – According to his Twitter, it sounds as if Sanity’s Alexander Wolfe is done with WWE.

Lynch is happy to be here and puts over her Mania win. Nothing focuses her more than the Superstar Shakeup, and knows she has a lot of challengers. She’ll take out Lacey Evans, and then the other dopes. Ember Moon arrives and joins Smackdown. Moons says she’s here to make a name for herself, and the way to do that is to step up to Becky. Bayley arrives and joins Smackdown. She’s happy to be on Smackdown and Lynch asks if she wants a hug. She and Lynch take a trip down memory lane, but Bayley wants Lynch’s titles. The IIconics interrupt, making fun of Moon & Bayley. They then claim their titles are better than Becky’s. Paige arrives and Mandy & Sonya interrupt. Fucks sake. They say they don’t need Paige and say Absolution is here. Paige instead introduces her tag team, Asuka & Kairi Sane. Asuka & Sane hit the ring and we get a big brawl. Lynch watches on as they all destroy each other. Are Asuka & Sane the Japanese Experience?

Asuka, Sane, Bayley, & Moon defeated Mandy, Sonya, & The IIconics. This was a solid match, and also gave us a much needed reshuffling of the women’s division. Sane & Asuka will rule as a tag team.

VINCE’S BIGGEST ANNOUNCEMENT OF ALL TIME THIS WEEK:

Vince jokes about being back in Montreal. He rarely puts a seal o approval on a star, but this man is the future of Smackdown and WWE, and introduces Elias. He says Vince understands what WWE stands for. Elias says he’s questioned Vince in the past, but now knows that Vince knows what the fans want. Smackdown will become the temple of Elias. He’s interrupted by Roman Reigns. He kicks Elias’ ass, Vince yells at him and Reigns superman punches Vince. Reigns says Smackdown is his yard now. Roman is a good move to Smackdown, but nobody bought the fake out in any way.

Reigns then drops Elias with a spear before leaving