After a 40-year stadium ban for women in Iran, thousands of female fans were allowed to attend Iran's World Cup qualifier. 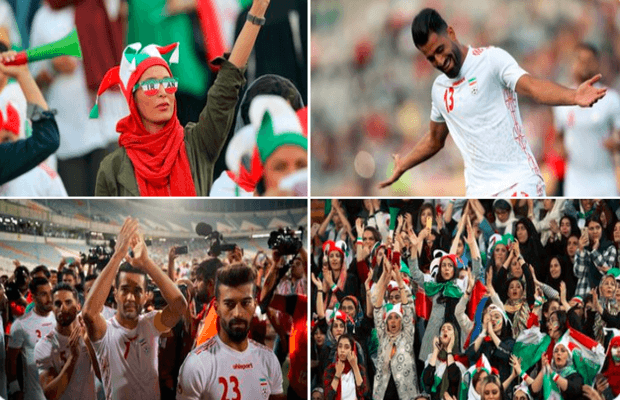 Iran beats Cambodia by 14-0 in the 2022 FIFA World Cup Qualifiers Group C match on Thursday. The match was played at the Azadi Stadium having the capacity of 100 thousand people in the Iranian capital, Tehran.

Iran players were ruthless from the very beginning as Ahmad Nourollahi opened the scoreboard in the fifth minute.

Ansarifard (4) and Azmoun (3) help the team Iran to a remarkable score line in Tehran.

This was the Cambodian side’s heaviest defeat in their football history. The worst-ever defeat they had suffered before this was a 10-0 loss against Indonesia back in 1995.

It was the historic moment for the women in Iran, who got to watch a FIFA soccer game from inside a stadium for the first time in almost 40 years.

Last month, a woman died after burning herself over a jail sentence for violating Iran’s male-only policy for stadiums. As she watched the match disguised as a boy.

tweet
Share on FacebookShare on TwitterShare on PinterestShare on Reddit
Saman SiddiquiOctober 10, 2019
the authorSaman Siddiqui
Saman Siddiqui, A freelance journalist with a Master’s Degree in Mass Communication and MS in Peace and Conflict Studies. Associated with the media industry since 2006. Experience in various capacities including Program Host, Researcher, News Producer, Documentary Making, Voice Over, Content Writing Copy Editing, and Blogging, and currently associated with OyeYeah since 2018, working as an Editor.
All posts bySaman Siddiqui