The Australian cricket team reached Pakistan on Feb 27 for a historic tour, the first in 24 years! 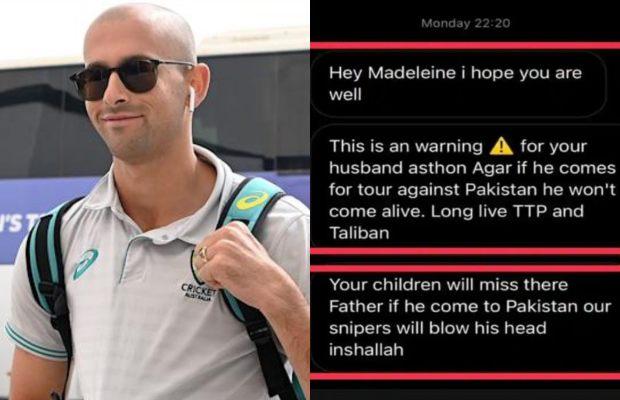 The statement from the Australian Cricket board comes a day after as they, the Pakistan Cricket Board, and government security agencies had investigated a death threat sent to Agar’s partner, Madeleine, on social media.

Australian Cricketers’ Association chief executive Todd Greenberg in a statement, as quoted by the Sydney Morning Herald, said,” Australia’s cricketers remain in “good spirits” and will continue preparations as normal before Friday’s first Test, despite a death threat sent to the partner of Ashton Agar.”

“Cricket Australia is aware of a social media post, of which the nature and content have been investigated by the PCB, CA, and combined government security agencies,” the statement read.

As being reported, a message was sent to Agar’s partner, Madeleine, on social media, which was immediately reported to CA and the PCB.

The cricket board, however, clarified that “extensive security plans are in place for this type of social media activity.”

The investigation into the matter reveals that the family of the Australian cricketer received threatening messages via a fake Instagram account having ID: jyot.isharma391.

The messenger warned him against playing in Pakistan.

A portion of the message reads: “This is a warning for your husband Ashton Agar if he comes to tour against Pakistan he won’t come [back] alive.”

The message also references Agar’s children, which he does not have.

The Australian cricket team reached Pakistan on Feb 27 for a historic tour, the first in 24 years!

Australia last played on Pakistan soil in 1998. The visiting team had won the three-Test series 1-0 and blanked the hosts in the three one-day internationals.

tweet
Share on FacebookShare on TwitterShare on PinterestShare on Reddit
Saman SiddiquiMarch 1, 2022
the authorSaman Siddiqui
Saman Siddiqui, A freelance journalist with a Master’s Degree in Mass Communication and MS in Peace and Conflict Studies. Associated with the media industry since 2006. Experience in various capacities including Program Host, Researcher, News Producer, Documentary Making, Voice Over, Content Writing Copy Editing, and Blogging, and currently associated with OyeYeah since 2018, working as an Editor.
All posts bySaman Siddiqui