Why Only Ban Asif Ali? 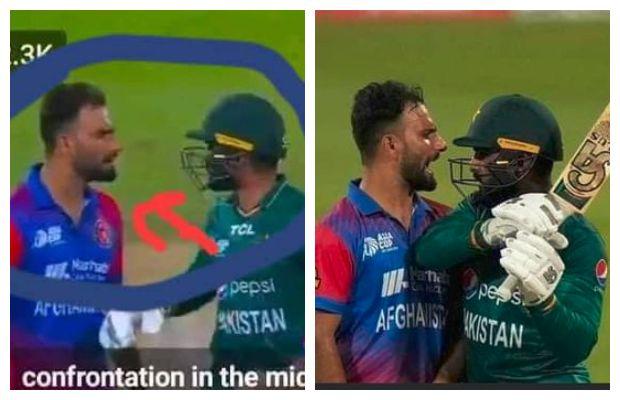 Asif Ali and Fareed Ahmad will likely get the maximum punishment for breaching Level 1 of the ICC code!

The two cricketers have been reportedly summoned by Match Referry Andy Pycroft.

Pycroft, known as one of the strictest match referees on the ICC panel, held a hearing on the matter after the match.

Sources claim, he has informed the players about the fines for breaching Level 1 of the code.

The two cricketers were involved in an intense exchange that happened after Ahmad teased Ali following his dismissal.

The hashtag #BanAsifAli is currently trending on social media, perhaps started by disappointed Indian cricket fans who aimed for Afghanistan’s victory to get a chance to be back in Asia Cup after being knocked out by Pakistan at the Super-4 stage.

While most of the tweets are targeting only Asif’s attitude, it was initiated by the Afghan players if we take a closer look at the clip from last night’s match.

Fareed Ahmad was seen getting aggressive toward Asif Ali at first, after which he angrily raises his bat in the air as if trying to hit the Afghan pacer.

At this moment, both were close enough to have body contact.

In the heat of the moment, another Afghan player Fazalhaq Farooqi quipped at Asif as he walked toward the pavilion.

This bowler, who's name is not even known my many cricket fans misbehaved first. He should be banned not Asif Ali.#BanAsifAli pic.twitter.com/0wZIs888SR

If the match referee slaps punishment, Pakistan’s Asif Ali and Afghanistan’s Fareed Ahmad are likely to get a one-match suspension.

Well, Fareed Ahmad’s suspension won’t matter much as Afghanistan is already out of the tournament.

However, losing Asif Ali, who is currently one of Pakistan’s steadiest batters may get the green team into trouble as they are yet to play the finale against Sri Lanka this Sunday (September 11).

Our dear afghan brothers.
Please note when you play with your well wishers than learn to respect. Pakistanis are training you so keep your teeth to yourself.
Behave!#PAKvAFG pic.twitter.com/3zM3QgRQja

#BanAsifAli from hitting sixes against India and Afghanistan!

First, congratulations team Pakistan, especially #NaseemShah. Second, Afghanistan players should learn some ethics. This is not the terrorist cricket ground. This is game of ethics, discipline & respect. Show some etiquette, and brotherhood. #PAKvAFG #NamakHaram pic.twitter.com/BdLqddCz6I

Tenacious response by #NasimShah to uncalled for behaviour by some Afghan cricketers.#PAKvAFG

Why ban Asif Ali?
No one can see the Afghan player fareed who started this shameful act😡
#BanAsifAli#PakvsAfg pic.twitter.com/ugU2tSJNSx

tweet
Share on FacebookShare on TwitterShare on PinterestShare on Reddit
Saman SiddiquiSeptember 8, 2022
the authorSaman Siddiqui
Saman Siddiqui, A freelance journalist with a Master’s Degree in Mass Communication and MS in Peace and Conflict Studies. Associated with the media industry since 2006. Experience in various capacities including Program Host, Researcher, News Producer, Documentary Making, Voice Over, Content Writing Copy Editing, and Blogging, and currently associated with OyeYeah since 2018, working as an Editor.
All posts bySaman Siddiqui