The tour will comprise three Tests, three ODIs, and one T20I. 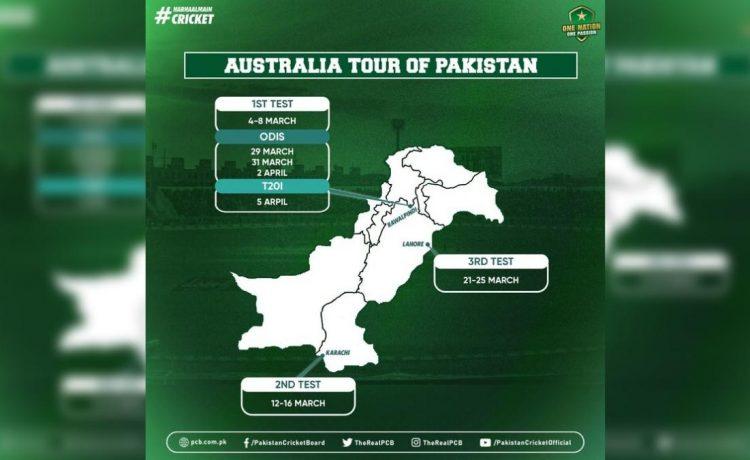 Pakistan Cricket Board (PCB) has announced a revised schedule for Australia’s tour.

The tour will comprise three Tests, three ODIs, and one T20I.

PCB on Friday has announced a revised itinerary for the Australia men’s cricket team’s tour of Pakistan during the current calendar year.

This will be Australia’s first tour to Pakistan in 24 years.

“The schedule has been revised to ease logistical and operational challenges as well as to avoid Pakistan Day rehearsals, which usually commence in Islamabad in the second week of March,” the statement added.

On the other hand, Cricket Australia on Friday also confirmed its first tour of Pakistan since 1998, locking in a three-Test series despite lingering security concerns.

“The tour will proceed for the first time in 24 years. This is a historic occasion and important for the global growth and health of the game,” said Cricket Australia CEO Nick Hockley.

“We are looking forward to an exciting series between two world-class teams,” said Hockley.

tweet
Share on FacebookShare on TwitterShare on PinterestShare on Reddit
Saman SiddiquiFebruary 4, 2022
the authorSaman Siddiqui
Saman Siddiqui, A freelance journalist with a Master’s Degree in Mass Communication and MS in Peace and Conflict Studies. Associated with the media industry since 2006. Experience in various capacities including Program Host, Researcher, News Producer, Documentary Making, Voice Over, Content Writing Copy Editing, and Blogging, and currently associated with OyeYeah since 2018, working as an Editor.
All posts bySaman Siddiqui