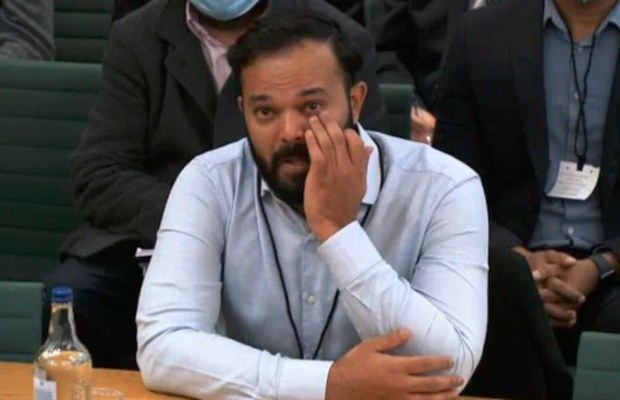 Azeem Rafiq’s emotional testimony about his experiences of racism at Yorkshire Cricket Club has rocked the sports world.

The 30-year-old Pakistan-born English cricketer fought back tears during the testimony given in front of the British parliamentary committee onTuesday as he claimed racism put an end to his cricket career.

“Me and other people from an Asian background… there were comments such as ‘you’ll sit over there near the toilets’, ‘elephant-washers’,” the 30-year-old Rafiq said.

“The word ‘Paki’ was used constantly. And there just seemed to be an acceptance in the institution from the leaders and no one ever stamped it out.”

The off-spinner, who had dreamed of playing for England, said cricket was blighted by institutional racism “up and down the country”.

Rafiq, a practicing Muslim, also recounted an experience of being “pinned down” and forced to drink alcohol at the age of 15 when he was at his local cricket club.

And in a highly emotional segment of his evidence, which lasted nearly 100 minutes, he spoke of the “inhuman” treatment by Yorkshire when his son was still-born in 2017.

“They weren’t really bothered about the fact that I was at training one day and I get a phone call to say there’s no heartbeat,” he said, his voice cracking.

Rafiq, who had two spells at Yorkshire, said: “Do I believe I lost my career to racism? Yes, I do.”

‘Kevin’ was something Gary used to describe anyone of colour in a very derogatory manner,” he said. “It was an open secret in the England dressing room.”

Rafiq, who said he had refused to sign a confidentiality form and take a pay-off from Yorkshire, added 2005 Ashes winner Hoggard had apologised to him for his comments.

He also mentioned a number of former teammates, including ex-England internationals Matthew Hoggard, Tim Bresnan, and Gary Ballance, the latter still at Yorkshire, had used racial slurs towards him.

Michael Vaughan: “He may not remember it because it doesn’t mean anything to him, but three of the four Asian players he mentioned do remember it. He then used his platform (newspaper column) to discredit me. He seems to have taken the same stance as the club – deny, deny, deny,” Rafiq said.

Asked about Vaughan, Rafiq said: “Michael might not remember it… three of us, Adil, myself, and Rana remember it.”

During a match, former England captain Vaughan is alleged to have told four Asian cricketers, “There are too many of you lot, we need to do something about it.”

Rafiq said, “Gary would regularly make belittling or derogatory comments about my Pakistani heritage like ‘don’t talk to him, he’s a P***’. Or ‘Why are you talking to him, he’s a P***?’ It became unbearable. At the PCA Awards in 2014, Gary made another racist, belittling comment to a woman about me in front of me. I was so fed up that I wanted to hit him and we had to be pulled apart by our agent, Will Quinn.”

The former England batter has admitted to calling Ballance ‘p***’. However, he claims it was just banter.

Rafiq said:  ‘Kevin’ used a derogatory term for players of colour and was first introduced by Ballance. Hales, a close friend of Ballance, even named his dog Kevin which Rafiq feels was a direct result of the meaning attached to it.

Former England bowler Hoggard is claimed to have started calling Rafiq as ‘Raffa the Kaffir’.

Rafiq said: “The comments from Hoggy towards myself and the other Asian players – Adil (Rashid), Ajmal (Shahzad) and (Naved Ul) Rana – were constant, on a daily basis. He would also call us things like ‘elephant washers’ and P***.’ After my Sky interview, I took a phone call from Matthew Hoggard. And he basically said, ‘I didn’t realise… I’m really sorry if some of the comments made you feel the way you describe it. I just want to apologise’. When someone does that, I was like, ‘Mate, thank you, really appreciate it.”

The former England allrounder is alleged to have made regular racist remarks with Rafiq filing a formal complaint against him in 2017.

Rafiq said, “Tim was very powerful at YCCC and it is worth noting that Tim and Andrew Gale are related – Tim is Andrew’s brother-in-law. As with Andrew, Tim frequently made racist comments and was unduly harsh towards me compared to white British players. I made a formal complaint against him in 2017. Six or seven players made a complaint about Tim Bresnan that year but it was me who was portrayed as the troublemaker.”

Rafiq alleges mistreatment from Gale who referred to him as ‘Raffa the Kaffir’, ‘P***’, and so on.’

Gale, the former Yorkshire captain, and coach has been suspended for a historic tweet.

Moxon, Yorkshire director of cricket, is on leave as of now. Rafiq alleged he ignored and failed to stop racist behaviour.

Rafiq claims the day he returned to the club after his son’s death, “Martyn Moxon literally got me in a room and ripped the shreds off me. I’ve never seen him speak to anyone like that through my time at the club. I couldn’t believe it.”

Rafiq called Root ‘a good man’ whom he has never heard of making any racist comments. However, the allrounder says the fact Root doesn’t remember racist language being used reveals how normalised it is.

“Joe Root is a good man. He never engaged in any racist language. But Rooty was Ballance’s flatmate and was involved in those social nights out where I was called a ‘P***’. He might not remember but it shows how normal it was that even a good man like him doesn’t see it for what it is,” Rafiq said.

Rafiq also said former England batsman and coach David Lloyd had made derogatory remarks about him and Asian cricketers in general, such as “getting subs (subscriptions) out of Asian players is like getting blood out of stone”.

Lloyd apologised in a tweet on Tuesday, with the 74-year-old saying of his “private” October 2020 comments:

“I deeply regret my actions, and I apologise most sincerely to Azeem and to the Asian cricket community for doing this, and for any offence caused.”

In September 2020, Rafiq made accusations of racism and bullying at Yorkshire.

An independent report found that a number of his accusations were true and the case became a major media story in the United Kingdom.

It led to resignations from top administrators, the suspension of a coach as the club was the subject of investigations by the England and Wales Cricket Board (ECB) and Digital, Culture, Media and Sport Select Committee in the British parliament.

The fallout for Yorkshire over the scandal has been devastating, with sponsors making a mass exodus, and the club has been barred from hosting lucrative international matches.