Babar leads the chart with 865 points. 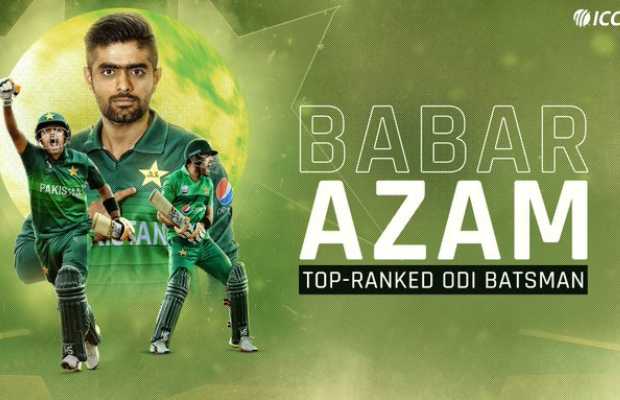 Yes, it is official! Babar Azam overtakes Virat Kohli to become the world’s no 1 ODI batsman.

The latest ICC ODI rankings updated on Wednesday show Azam acquiring the top position with 865 points while Kohli is at number 2 with 857 points.

The 26-year-old Pakistani cricketer has been in fine form with the bat in the 50-over format.

Babar has scored four centuries in his last 10 innings in the 50-over format, taking his tally of tons to 13.

With the latest development, Babar ended Kohli’s five-year reign at the top of the ICC rankings.

The Indian skipper has been sitting at the top of the table since October 2017.

This is the first time Azam has ranked as the number one ODI batsman in the world.

While the last Pakistani to achieve the top position was former captain Mohammad Yousuf in 2003.

Opener Fakhar Zaman entered the top 10 of the ODI rankings, he is now at no. 7.

A good update for 🇵🇰

“I feel privileged and honoured to have joined the company of stalwarts like Zaheer Abbas, Javed Miandad, and Mohammad Yousuf, who will always be the shining stars of Pakistan cricket,” Azam was quoted as saying by the PCB in a statement released shortly after the ICC update.

Azam said that this “milestone will now require even more hard work and absolute consistency” from him if he wants to hold on to the spot like West Indies great Sir Vivian Richards and India’s Kohli.

“I have also previously topped the T20I rankings, but the ultimate ambition and goal are to lead the Test rankings, which are the real testament and reward to a batsman’s caliber, reputation, and skills,” he added.

The Pakistan skipper maintained that he understands that to achieve his goal, he will “not only have to perform consistently but more importantly, against the top sides”.