Khushdil Shah played an aggressive knock of 41 runs to finish off a 306-runs chase against WI. 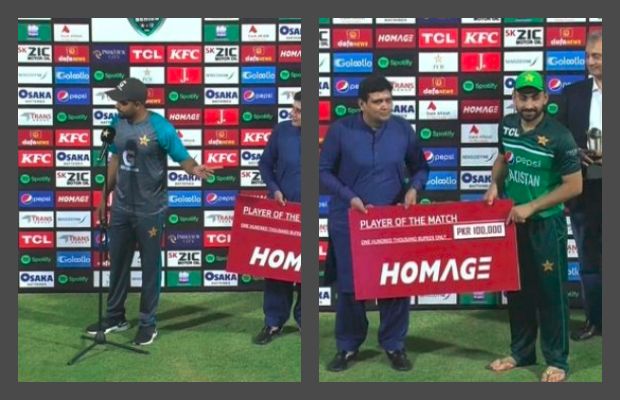 Babar Azam has won millions of hearts as he gave away his Man of the Match award to Khushdil Shah!

Skipper Babar Azam made sure that the due credit was given to his teammate Khushdil Shah for his match-winning performance.

Thanks to Shah’s hard-hitting the first ODI match of a three-part series against West Indies, Pakistan won by 5 wickets.

Having started the over with 44 required off 24 balls, Shah’s hitting saw the hosts end it needing 24 off 18.

His 23-ball 41 not-out overshadowed all the other players’ performances, including Babar’s Azam record-making century.

Khushdil Shah played an aggressive knock of 41 runs to finish off a 306-runs chase against the visitors.

The gesture by the skipper is winning the hearts of the cricket fans.